‘VIEWS FROM A BURNING WINDMILL: AN INTRO 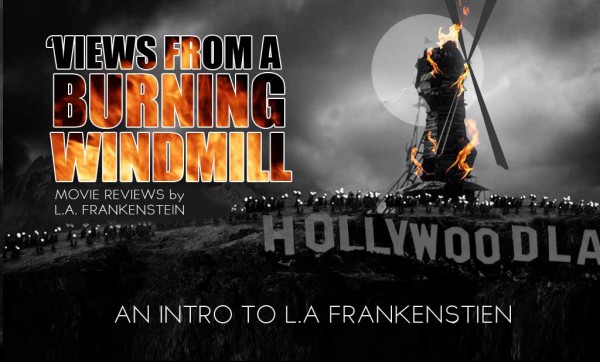 Well hello there, I’m L.A. FRANKENSTEIN, and I watch a lot of movies. Now many people will say they watch a lot of movies, but “a lot” is a relative term, so let me ‘splain my cinematic street cred. I don’t have tv. I have A tv, but no channels. I also don’t have a “regular” job, so I never have to be up early in the morning. Plus, as you may infer from my name, I live in L.A., one of the few places in the country that still has surviving Arthouse and Repertory House theaters. When I get up, I often watch a movie with breakfast. During filler time, when maybe you’re watching reruns of Big Bang Theory, I’m watching a movie. Saturday afternoons I’m often catching a double feature at the New Beverly Cinema.

Point being, this isn’t me writing random reviews, it’s my actual movie watching diary. Sometimes streaming, sometimes dvd, sometimes(preferably) in the theater, this is what I’m putting into my eye holes. My tastes tend to skew to the extremes a bit, but that’s largely due to my yearning for something different/original. I love great movies…I love horrible movies…I’m not so fond of mainstream hack bullshit. I loathe “typical.”

My hope in doing this is to encourage you the reader to take a chance on something you may have not watched otherwise. If you want to know if that new release is good or not, well pretty much EVERYONE online is waiting to spoil it for you right now. Me, I don’t care. If you want to take a chance on something different, and NOT just watch what everybody else is watching, then keep checking back here for reviews.

Now to explain my system! Each review will look like this:

Most of this is pretty self explanatory. GENRE TAGS are exactly that. What kind of movie is this?

FS is the Franken Score. My five star rating of the film.

I think in properly critiquing a film, you have to take genre into account. While I’m absolutely a fan of the late Roger Ebert, I distinctly remember as a kid watching “At The Movies” once and being annoyed. They were reviewing a Friday the 13th movie (part 6 or 7) on the same show as more serious fare. Naturally, they both hated it, and I couldn’t help but yell at the screen, “Guy’s they’re totally different!”

This is the basis of my rating system. Apples should be reviewed as apples, oranges as oranges. (and yes by extention of the metaphor, lemons as lemons) You can’t compare Vertigo with Slave Girls From Beyond Infinity. Vertigo is one of the greatest films ever made, and…well, Slave Girls is full of skimpy space bikinis. Slave Girls is NOT a great film. However it IS a great 80’s, B-Movie, Skin Flick…

That’s the GRS. Genre Relativity Score…judging the movie against its peers.