This just might be the DROID you’re looking for! 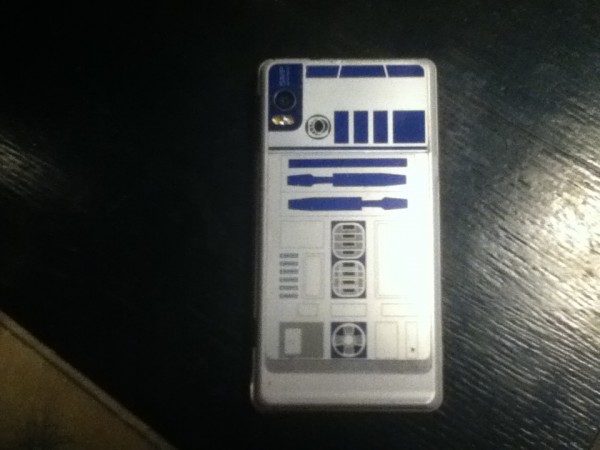 So last year we had an “Ugly Sweater” party and the “Secret Hideout” , There was lots of eating, drinking…lots of drinking and being merry. In the middle of the party din a familiar set of  digital “chirps, whistles and warbles” catches my ears.

It was unmistakeably R2-D2. So, I do what any self respecting Geek would do and I go to investigate. I ask all our drunk and rowdy party guests deck out in bad sweater “….did anyone hear R2?” Some of the girls look at me like I just asked them if they would like to see my light saber collection…whatever with them. Finally, one of the homies Ronnie from NYC says. “Yo, that was my Droid phone”.

Ronnie then proceeds to pull out his Droid with of all things…an R2-D2 case! “How fitting”, I said.
Needless to say we became fast friends and continued to drink and party the night away. Its aways cool to meet other Geeks in a crowd of  Non-Geeky people. Specially since everyone elses was talking about work,  IPAs or Fixed Gear Bikes. Fixed Gear Bikes..what the fuck?  Who are you and why are you in my house!?

Anyway, here is the Pic I snapped with my iPod2: 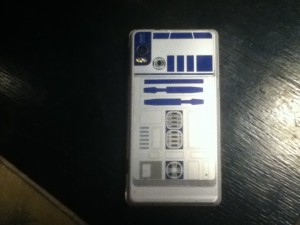 So I decided to do some more reasearch and I was floored with what I found,
Verizon Wireless released a DROID R2-D2 phone by Motorola! WOW!

* After seeing his droid and seeing all the cool stuff this Droid can do, I now look at my iPod 2 with just a tad bit of dissapointment…sorry Steve.

Here are the deets straight from the Verizon Site: 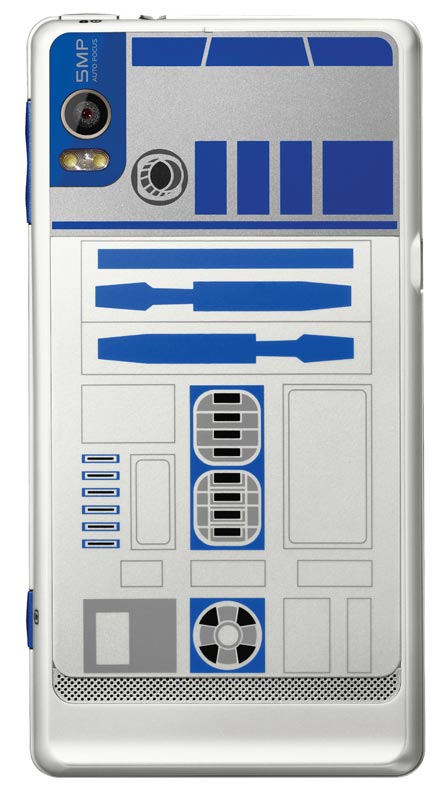 YES, this is the Motorola…er, DROID your looking for!

Based on the Motorola DROID 2, the DROID R2-D2 runs the latest Android operating system–OS 2.2 (aka, Froyo)–which provides a faster overall Android experience as well as greater multitasking capabilities. You’ll be able to receive notifications, listen to music, and even record GPS data without keeping the application open. And it features a plethora of new enhancements, including an improved QWERTY keyboard, full push corporate e-mail, and Adobe Flash Player 10.1 for access to the full Web. It also offers enhanced Exchange support, with Calendar syncing, Global Address Lookup, improved security, auto-discovery, and more.

Sporting a new super-slim form factor, the DROID R2-D2 offers a redesigned symmetrical keyboard with raised keys for more responsive typing to push out notes and status updates. Speech-to-text input and the virtual multi-touch keyboard (accessed via the 3.7-inch touchscreen) allow for quick messaging, and you can use the Swype keyboard enhancement for even faster input–with up to 50 words per minute using one continuous finger motion across the screen keyboard (learn more about Swype below).

With integrated Google technology, DROID R2-D2 brings one-touch access to the popular Google mobile services millions use every day, including Google Search by voice, Google Maps with Street View, GTalk instant messaging (with presence capabilities), YouTube, and Picasa. The DROID R2-D2 also provides easy access to both personal and corporate e-mail, calendars, and contacts supported by Exchange Server and Gmail. And through Android Market, you’ll get access to thousands of useful applications, widgets, and fun games to download and install on your phone, with many more apps being added every day. 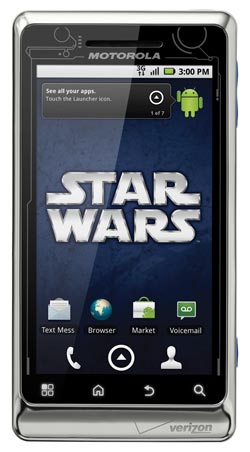 In addition to high-speed connectivity on the fast and reliable Verizon Wireless 3G network, you can also share the built-in 3G Mobile Hotspot via Wi-Fi among five devices–laptop, another phone, MP3 player, and more (additional service charge). (See more details on optional Verizon Wireless services below.)

You’ll also enjoy a wide range of multimedia entertainment with the DROID R2-D2, including BLOCKBUSTER On Demand presented by V CAST Video for purchasing, renting, and viewing movies right on the phone and the NFL Mobile app for live news and game updates.

Preloaded social networking widgets allow you to sync and stream your feeds and updates from Facebook, Twitter, and MySpace all to one screen in real time. Other features include a 5-megapixel camera/camcorder with DVD-quality video capture, 8 GB of onboard memory and a pre-installed 8 GB memory card, ultra-fast Wireless-N Wi-Fi networking, Bluetooth for hands-free devices and stereo music streaming, GPS turn-by-turn directions via free Google Maps with Navigation (Beta) as well as VZ Navigator, and up to 9.5 hours of talk time. DROID is a trademark of Lucasfilm Ltd. and its related companies. Used under license. 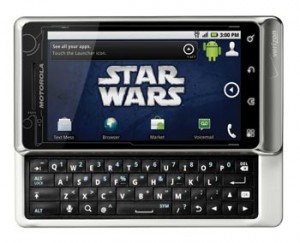 All details, texts and images belong to Verizon Wireless