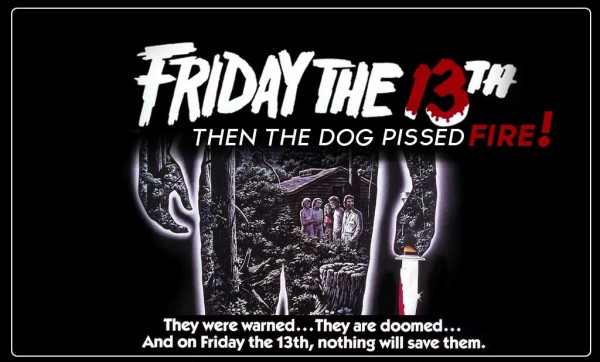 In most horror series, the villain is also sort of the lead, so while you need to satisfactorily finish your film, you also want to be able to bring him back for a sequel.  If you want your series to continue, you can’t end any one episode too absolutely.  It looks kinda silly to call yourself “The Final Chapter” when there are six more films after it.  (looking at you Voorhees)

I’ve always had a soft spot for the Friday the 13th movies…it’s right below my ribcage where a maniac in a hockey mask once shoved a razor tipped arrow.  Wokka Wokka!

I’m already making off references, as I believe there were razor tipped arrows in parts 1 and 3, but not 4…and naturally it’s 4 we’re talking about here…Or more properly, Friday the 13th the final chapter.  Yeah, they called it The Final Chapter, and they meant it…at first.

Way back in 1984, the whole concept of sequalizing a hit movie to death wasn’t the Hollywood given it is today, so four seemed like a lot…like quitting while you’re ahead, and so it was time to kill off Jason.

(Horrorhound side note…I’m well aware that Christopher Lee’s Dracula squeezed the vein dry well before this, as we’ll discuss in a future column…Godzilla’s coming up too…and possibly Universal’s Big 3) 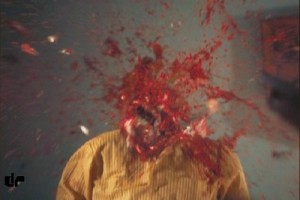 …actually a shot from Dawn of the Dead (the real one) which is obvious as Mr. Voorhees would never wear that shirt

FX master Tom Savini has said that they were so sold on finishing things off that originally Tommy Jarvis was going to blow Jason’s head up with a converted microwave oven-gun thinghe built…Yup, you read that right.  It would have been silly, but it would have been pretty damn FINAL too.  Naturally, that’s not what happened, and if you’re at all a fan of the series you can probably picture what did.  I’m not going to ruin it for the noobs, but they kill him good.  Even now I can hear Corey Feldman’s “Die!  Die!” ringing through my memory.

Well, yeah.  But the movie made a killing (pun intended!) so somebody or other talked somebody else into making a fifth film.  Trying to remain somewhat realistic, the character of Jason is replaced in part 5 with a copycat killer who models himself after the now worm ridden serial-mass-murderer.  Oh shit, did I just ruin part 5 for you?  Don’t worry, it was ruined a long time ago.  It’s not good.  It’s borderline so-bad-it’s-good.

Back to business.  How does one go about bringing back to life a dead and buried serial killing superstar?  (yeah, he’s a SUPERSTAR, Jason was a guest on the Arsenio Hall show for chrissakes…one of the many things Mr. Voorhees has in 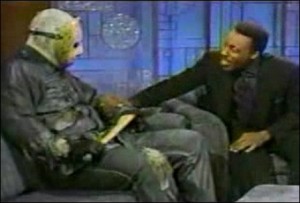 “So tell me about your childhood”

common with former president Bill Clinton)  The filmmakers decided to go back to basics, or back to the basics of horror anyway, and crib a bit from Frankenstein.

Tommy Jarvis (played in this installment by Return of the Living Dead’s Thom Matthews) is now an adult, but for some reason he just can’t shake that whole childhood trauma thing, so he breaks out of the mental institution he’s been staying in.  I’m assuming he’s in the Serial Killer Survivor PTSD wing along with a gaggle of Final Girl types.  He and Horshack from Welcome Back Kotter drive on down to the graveyard and dig up Jason, so, uh, Tommy can make sure he’s dead.  Upon seeing the maggot ridden corpse, instead of jumping up and down squealing “yippee” Tommy breaks off a piece of the cemetary’s fence and goes to work impaling Jason over and over.  He finally tires, leaving the long metal spear protruding from Jason’s chest, just in time for the most convenient lightning bolt in the history of cinema! 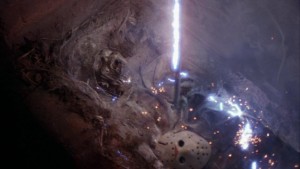 That’s either Jason Voorhees after being dead a decade, or a Thanksgiving turkey on black Friday

Well, if you answered “crispy, smelly corpse”  you’re wrong!  (Don’t worry about it, you probably just forgot to carry the Horshack)  The correct answer is Super-Jason!  In previous installments Jason took a lickin’ and kept on tickin’ but now he’s at a whole different level.  Contained in that lightning bolt was the electro-mystical equivalent of up/down/up/down/left/right/left/right/select/start!    Jason is now an unstoppable killing machine who shrugs off having a police revolver emptied into his chest. (admittedly, he pauses briefly when the last shot is in his hockey mask clad face…oh, did I mention he had been buried with his hockey mask?)  I really have no good explanation as to why he’d be buried with his mask, or why after such a long time he’s be so spry…you’d think after ten years or so he’s just be a scribble of bones and gristle, but nope, it’s friggin’ Jason Voorhees, so he’s buff and itchin’ for some killin’…(man that’s a shit ton ‘o apostrophe’s in that sentence)

Part 6 is one of (8 probably tops it) the lightest, least gory entries in the series.  It’s got a high body count, but few memorable kills and very little gore.  The guy who gets his face shoved through the side of an RV is the one  that usually makes the highlight reels.  Oh, you want the rest of the series highlight kills do you?

8 – “Take your best shot” boxer gets his head punched off

9 – Nude girl is split in half with tent stake

And as you can imagine, the series is all downhill after part 6, with the filmmakers continually going for gimmick ideas…

Part 8 – Jason on a boat, then Jason in New York

Jason X – Jason on a spaceship

Of those four, none are quality motion pictures, but 7’s kind of fun in a Godzilla movie, ”let’s watch the smackdown!” type of way…and Goes to Hell is frustratingly stupid, but the unrated version is worth watching if you’re a gore hound.  Plus if you’re a child of the 80’s you’ll dig seeing the corpse of Buck Rogers’ Erin Gray get impregnated by a squiggly demon-worm-Jason-soul-thing.  The saving grace of these four films is Kane Hodder.  He plays Jason in all four, and unlike some other Jason’s  his size and body language really distinguish him and make Jason intimidating…angry…

So there you go.  I can’t bring myself to recommend anything about pt 8, X, or the remake, but there’s something worth watching in the rest, even if all the sequels after 4 feel different.

A final note…Freddy vs. Jason.  Color me an apologist, but I don’t think it’s that bad.  While it certainly has weak points, I give it credit for trying to go back to the beginnings, the origins of both characters, and then really giving us a fight.  I mean it could be AVfuckingP where they got the monsters into the same movie but rarely the same frame of film.  Ugh.  In classic Monster Mash fashion we get a flimsy excuse for the characters to meet up, and then they fucking kick each other’s asses.  What more do you want?  It’s called Freddy vs. Jason, NOT Fellini vs. Jarmusch.

Who’s dead, or not dead, or dead again:  Jason Voorhees

The dog pissed fire moment:  about 10 minutes into part 6 when an act of a god who hates campers, dropped a lightning bolt into a dead monster electro-chargeing him back to life

What could have worked:  Tommy goes crazy and copycats Jason.  It’s so obvious, it’s so simple, it’s so perfect…and they fucked it up!  AFTER ALMOST DOING IT!  The end of Friday 5 shows Tommy wearing the mask and raising a knife behind the lead blonde!