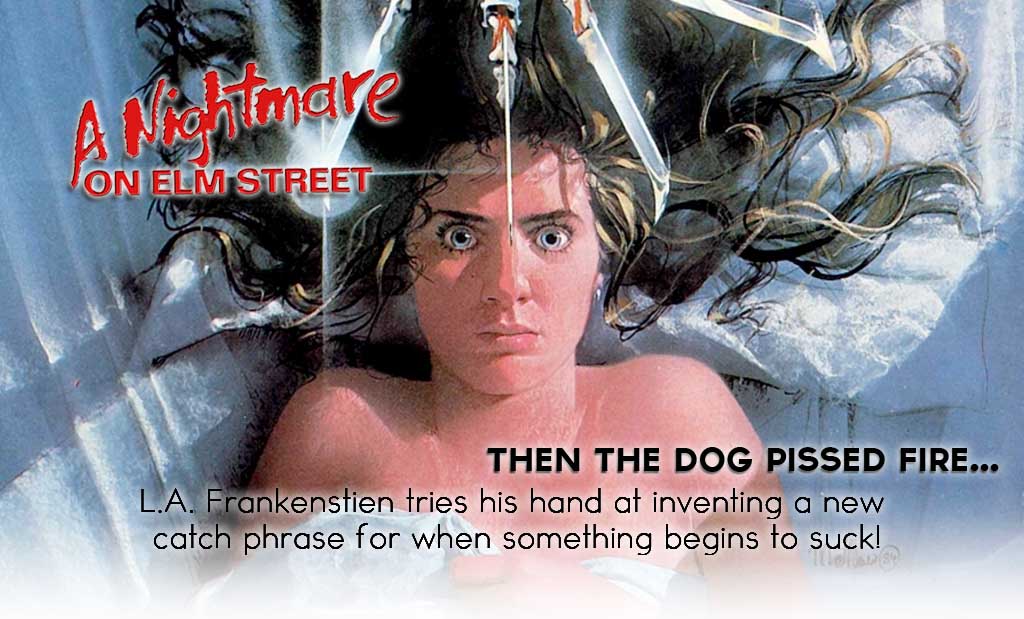 THEN THE DOG PISSED FIRE…
A Nightmare on Elm Street

Yeah, you read the title right.  I’ve got a gold puzzle box for whoever knows what that means. Well if you’re an 80’s horror hound, you’re probably giggling to yourself now, as you remember the beginning of A Nightmare on Elm St. part 4, The Dream Master.  If not, I’ll explain.

“…then the dog pissed fire” is my new term I’m trying to coin. What?  I can’t knowingly try to invent a catchphrase?  Somebody made up “Jump the Shark”,  right?  Nathan Rabin made up the term “Manic Pixie Dream Girl” and now everybody uses it.  As such, here’s my contribution to the national digital vocabulary.

“But what does it mean?”

In most horror series, the villain is also sort of the lead, so while you need to satisfactorily finish your film, you also want to be able to bring him back for a sequel.  If you want your series to continue, you can’t end any one episode too absolutely.  It looks kinda silly to call yourself “The Final Chapter” when there are six more films after it.  (looking at you Voorhees)

To begin my masturbation…I mean our exploration, of the Dog Pissing Fire phenomenon, let’s start with the saying’s namesake…

A Nightmare on Elm St. is genius. Wes Craven tapped into some of people’s oldest fears and made a hell of an inventive slasher film.  It works in almost every way, including the “wait, what?”  ambiguous ending.  Part 2, A Nightmare on Elm Street 2: Freddy’s Revenge is pretty weak and more memorable for the bad scenes (and overt homosexuality) than the good. (Freddy leaves the dream world to bust up a pool party?)  They do keep in line with the original as far as the ending goes at least. The story’s done and Freddy’s kinda dead…or something.  It’s left pretty open. Part 3, A Nightmare on Elm Street 3: Dream Warriors is back on the right track, though starting to seem a little light and jokey.  Here’s where we hit a snag plot-wise.  For the first time we get to hear “the rules”…at least as they apply to killing the son of a hundred maniacs once and for all. Nancy, our returning heroine from the first film, and some guy who’s not Bill Mahr, go out and finally finish Freddy off.  It’s a whole ritual, involving fighting a skeleton and consecrating a grave and stuff.  And guess what?  It works!  Freddy’s dead, once and for all!  Well, until the box office numbers came in.

“Jesus Christ, is this decimal point in the right place?” I imagine a New Line accountant being asked the day after Nightmare 3 opened.  The accountant answers “yup” and before the “p” sound is finished A Nightmare on Elm Street 4: The Dream Master is green lit.

But how do you make a sequel when you’ve just killed off your insanely popular killer?  How do you bring Freddy back to life?  Somebody,  (probably Director/Producer Renny Harlin, but I’d kill to know who) during some production meeting must have said “What if a dog pissed fire on his grave?”  and then somebody else must have said “uh, yeah, that sounds fine”…

If you haven’t seen the film you might be asking yourself if I’m joking…Nope.  The beginning of Nightmare 4 is so incredibly inept that you’d swear it was an after school special.  You’re totally ready for somebody to turn anorexic or get beaten by their alcoholic father until Freddy shows up and reminds you this is supposed to be an A-list theatrical HORROR release and not a high school theater performance.  After a quick catch up with our three survivors from the previous film, we’re introduced to a group of cardboard standees that couldn’t be more cliché if they wore signs around their necks labeling them.

Soon, (wait for it) a dog in a dream pisses fire on Freddy’s grave, causing him to reincorporate somehow.

I think that bears repeating:  A DOG IN A DREAM PISSES FIRE ON FREDDY’S GRAVE, CAUSING HIM TO REINCORPORATE SOMEHOW.  (stupid as it is, this fx sequence is the highlight of the film…the reincorporation, not the flaming urine)…The first thing Freddy does is spout a cheesy line that’s completely ADR-ed…as in Overdubbed…As in his lips don’t fucking move!

Check it and see.  We have a shadowy shot of Freddy standing still, looking creepy, and somebody went back and overdubbed a one-liner on to it.  Creepy no longer has a place on Elm st, it’s been run out of town by bad puns and cheesy one liners.  This is analogous to the rest of the series from this point on.

Now alive again, Freddy quickly and almost bloodlessly kills off two of our survivors from pt 3.  (Strangely, Joey’s waterbed seems to bleed instead of his body…so I guess that’s…well I don’t know what the fuck that is.)

And with that flaming canine urinary tract infection, a great horror series died. (to me anyway)

It’s true Nightmare 4 is one of, if not THE biggest moneymakers of the series, but that’s a reflection of the quality of the previous film (Anyone remember a few springs ago when everybody hated Shrek 3/Pirates 3/Spidey 3 but they all killed at the box office anyway?)  That’s anticipation money, not quality, must-see filmmaking.

In Part 4, Freddy Kruger the child killer is ALMOST as threatening as Bob Barker with a bad case of poison oak.  Hell, at least Barker’d be contagious and possibly try to grope you.  By the time Freddy’s eating tiny sausage faces off a soul pizza, you find yourself wishing they’d just get to Plinko already.

Nightmare 5 and 6 are similarly weak and indicative of the state of horror in the late 80’s and early 90’s.  It’s Velveeta horror…cheesy, over processed, and not what it appears to be.

Velveeta is “a processed cheese food” not real cheese

Wes Craven came back for part 7, technically called Wes Craven’s New Nightmare.  More a beloved cult film than a commercial hit, Wes tries to make Freddy relatively scary again, and goes meta way before “Meta” was “a Thing.” (I swear I’m starting to only be able to think in netspeak)  The “meta” aspect (wait, so that’s the guy who plays Freddy?  But he’s also still Freddy?  I don’t get it) along with the generational divide combined to kill it.

What I mean by the “generational divide” is just that, to 90’s kids Freddy was always a joke.  That’s why the Nightmare remake didn’t fly either.  Millennial kids know who Freddy is, and they think he’s a fucking joke.  He’s been a joke their whole lives.  They want their own killers (Jigsaw or creepy, pale Japanese kids) not their older sibling’s sloppy seconds.  I submit that as one of the reasons that the Texas Chainsaw or Dawn of the Dead remakes DID fly…the ’00 kid’s didn’t know what they were.  There was no preconceived notion of them being “cheesy.”

Leaving that tangent, I humbly submit for your consideration, that the Nightmare saga is 1, 2, 3, Freddy dies and we should leave things well enough alone.  Or, we can use New Nightmare as a suitable alternate.  I’ve had many conversations where phrases came up like “1, 3, New Nightmare…That’s the true shit.  The Nightmare saga IS Nancy’s story, and only the ones Craven is involved with are worth watching.”  Having just re-watched part 2, I’m inclined to agree.

A final note…Freddy vs. Jason.  Color me an apologist, but I don’t think it’s that bad. While it certainly has weak points, I give it credit for trying to go back to the beginnings, the origins of both characters, and then really giving us a fight. I mean it could be AVfuckingP where they got the monsters into the same movie but rarely the same frame of film.  Ugh.  In classic Monster Mash fashion we get a flimsy excuse for the characters to meet up, and then they fucking kick each other’s asses. What more do you want?  It’s called Freddy vs. Jason, NOT Fellini vs. Jarmusch…Although…

Who’s dead, or not dead, or dead again:  Freddy Kruger

The dog pissed fire moment:  About 15 minutes into part 4, where the dog pisses fire.

What could have worked:  Pretty much anything would make more sense…Hmm, how about he’s purposefully brought back by some band of satanic Freddy worshippers?

Check out AlienCyborgs.com for MORE “Then The Dog Pissed Fire”