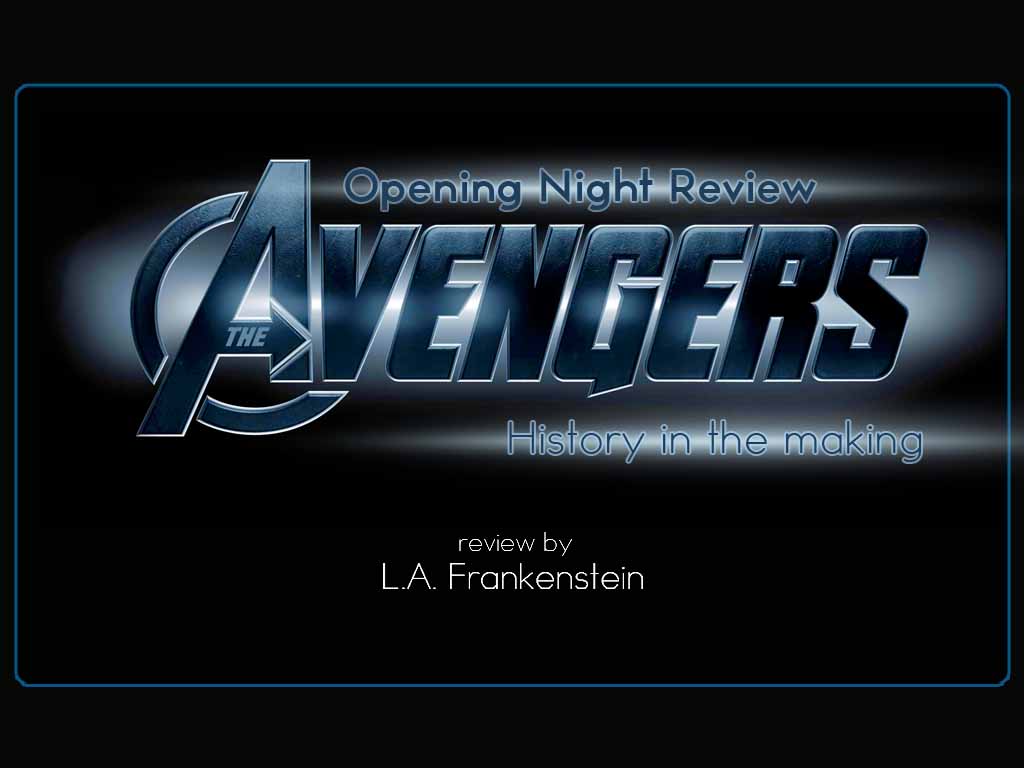 I have just witnessed an historic event.

“But I thought you were just catching a midnight show of The Avengers to review for the AC site?”

“Oh-kay, so you liked it…but let’s not get carried away calling it historic”

Well, I’m glad you asked, imaginary friend whose dialogue I’m making up for the purpose of this column. 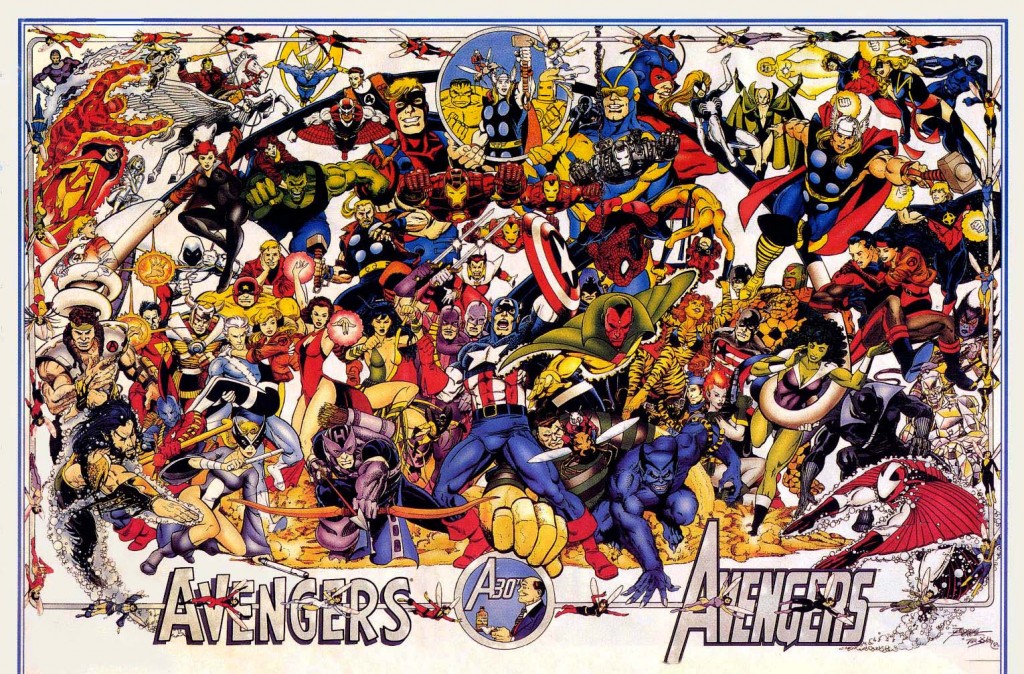 Yes, they’re all in there.

It’s a sequel to five other films.

A film series lasting to a sixth entry isn’t anything new, just ask Captain Kirk, James Bond, or Freddy Kruger…But what about a film that’s not just the sixth in a series but a sequel to four separate stories?  Still been done.  In a precursor to the slasher star burnout of the late 80’s(Jason/Freddy/Michael) Universal Studios’ popular monsters Dracula, Frankenstein, and The Wolfman were all sequelized into parody.  So what next?  The invention of the Monster Mash! (it’s a graveyard smash!)  Suddenly there was an (dare I use the Distiguished Competition’s lingo) alternate earth of sorts, where different Monsters from different movies could co-exist…or at least fight each other for the right to exist.  The Avengers is different, it’s a pre-planned super sequel!  To my knowledge this is unique.

“And there came a day, a day unlike any other, when Earth’s mightiest heroes and heroines found themselves united against a common threat. On that day, the Avengers were born—to fight the foes no single super hero could withstand!”

Both in the comics and the films, the team is made up mostly of characters who can support their own titles, not just a gathering of second stringers.  Even before The Avengers opened, Cap, Iron Man, and Thor all were greenlit for sequels to continue their stories after the turmoil of their current teamup.

Its got a great cast.

How crazy impressive is this roster?  I mean the credits read more like an Oliver Stone or Robert Altman film than a superhero movie.  Nobody’s ever put together a cast like this before.

Okay, you can certainly argue that Nolan’s Batman series (either Begins or Dark Knight) has a “better” cast, but most of them are playing support, and didn’t already carry a movie as the same character)  Being made up of older, distinguished character actors, the Bat cast probably has more Oscars between them than the Avengers do, but…you know, I’m gonna go check.  Brbb( be right back bitches)

So yeah…I just actually went and did that shit…unscientifically calculated from the “awards” section of the actors imdb pages, it looks like the Oscar tally goes a little something like this:

…Okay so Batman wipes the floor with ‘em…but it’s kinda cheating to have Michael Caine AND Morgan Freeman on the same team. (I mean who’s riding your bench Meryl Streep?)

Also, can we finally stop comparing the two?  I’m an old school Marvel guy, and only ever collected a few DC titles, but that doesn’t mean I hate the company.  I don’t read much Batman, but I’ve always liked the character, always been excited when a new movie comes out.  Batman kicks ass!  Of course he does…so does Iron Man.  They’re both pretty great, so enjoy it and shut up…now if you want to “talk shop” about a Batman vs. Iron Man scenario, that’s a different story.  Question:  Where does the battle take place, and did Batman have foreknowledge of the coming fight and time to prepare?

“Alright already, will you shut the fuck up and just tell me if the movie’s any good?”

Fine.  Ahem. *throat clear*  The story of The Avengers is mostly new.  By that I mean that it doesn’t draw too heavily from any single piece of previously published source material.  It’s got still streaming continuity from most of the five previous films, plus elements of the classic Avengers, and a heavy dose of The Ultimates, (a new millennial re-launching of the characters that tied the Avengers and S.H.I.E.L.D much closer together than before,  made Nick Fury not just black but specifically based on Sam Jackson, and re-wrote Hawkeye and Black Widow as S.H.I.E.L.D agents instead of reformed villains.)

We begin with a quickie villain setup that pretty much gives us the whole plot.  You’ve probably seen it in the trailers…Loki’s tweaking out from that whole “I just survived getting sucked into a wormhole after being utterly defeated and learning my whole life’s a lie” thing from the end of Thor.  He’s out in space scheming with the leader of these disposable aliens who, as you know, are at some point going to be invading New York.  Feeling like a pre-credit bumper from an episode of Buffy, it’s a “let’s get a threat setup so we can dive into our character conflicts” scene that could have easily been Faith and the Mayor, or Glory and her goons instead of Loki and The Other.(as he’s named in the credits…played by Whedon regular Alexis Denisof in a LOTR looking getup) Next we move into “getting the band back together” mode which quickly turns into band infighting and finally reconciliation in time for the big gig…and MAN is it a gig!  Oh yeah, if I’ve forgotten to mention it, this also happens to be one of the most action packed movies I’ve ever seen!  Some of the previous Marvel movies get criticized for not having enough action (looking at you, Cap) but this one has enough fights, explosions, and full on HULK SMASHES to make all your “KRAK-A-DOOM” dreams come true.

Marvel established a comedic tone in the first Iron Man that they’ve tried to stick to ever since, despite running concurrently with the Batman and X-Men franchises, neither known for having a heavy chuckle factor.  In Avengers, as with the action, they don’t just stick to it, they take it to the next level.  One of the big surprises of this film is how straight up fucking funny it is.  It was like a Denny’s next door to a comedy club…eveybody’s got jokes…but they’re all so true to character that it doesn’t come off as blatant.  Joss plays up the fact that we already know all the characters, and throws down knowing nods at every turn, and even drops in the occasional off-handed Marvel Universe reference. (Life Model Decoy, anybody?) Like he’s done so well in the past, Whedon  juggles nearly a dozen characters without any of them getting short changed on screen time.  EVERYBODY has a moment or two to shine…Cap, Iron Man, Thor, Hulk, Black Widow, Hawkeye, Loki, Fury, Coulson, Maria Hill, even Pepper really pops as the only super-love interest to make the movie.  Jane Foster (Natalie Portman) gets a mention, but we never find out what’s happening with Betty Ross(Liv Tyler), or hear whether Cap’s agent Carter(Hailey Atwell) is dead or a great-grandma somewhere.  It’s impressive how Whedon manages to give each character a great dramatic moment, a big laugh, and a great action piece.

Oh, and about that action…If you read my previous post about comic movies and their ALOD (Appropriate Level Of Destruction ) discrepancies, then you know I was a bit worried that we’d get an ending like Incredible Hulk, where massively powerful monsters smash cars like it’s impressive or something.  Yet again,  I’m happy to say, expectations surpassed!

I could certainly keep going, but why?  Just go!  Like right now…put down the mouse, RUN, don’t walk, to the theater and just watch it already!  You won’t be sorry.

Who doesn’t like to rank stuff?  Here’s my ladder of awesome for the Marvel movies:

editors note – This is THE best Marvel movie…ever!  – J

All Images, Characters, Logos and I.P are property of Disney Studios, Paramount Pictures and Marvel Studios. Aliencyborgs does not own any the rights.
Share

4 thoughts on “L.A. Frankenstein Reviews The Avengers and witnesses history”