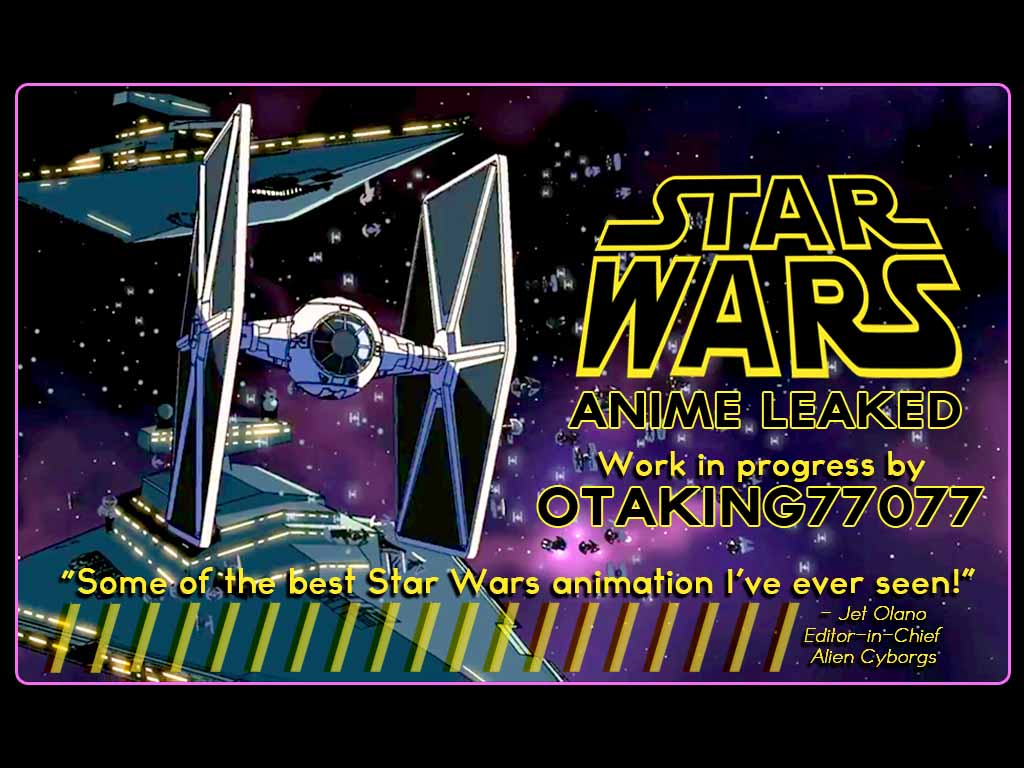 Yesterday I saw some links going around the net for an alleged “Star Wars” anime, so with my interest piqued I began to start poking around the interwebs. What I found was an interesting looking animation that was  posted by a random person who paired the animation to Sleigh Bells…and I’m not talking the Yule Tide kind either.

Anyway, I watched about 5 seconds of the alleged video and shut it off because if there is one thing I hate its looking for something specific and either getting A) Rick Rolled by some 18 yr old “YOLO” posting Douchbag or 2) finding the content but its paired with some “Super Murder Mix Extendo Mash Up” track of some obscure Euro D.J that I’ve never heard and usually don’t like!

And that’s exactly what happened to me. I finally got frustrated with all the “fake posts” and tried to find out more about the original artist of the piece and where the video lived. Well, after a few google searches I came to find out the artist’s name is “OTAKING77077” but that wasn’t enough info, so like Neo I wanted to find out more so deeper into the rabbit hole I went. Well…one thing led to another and I got side tracked by a meme of  Peter “Chewbacca” Meyhews grabbing Carrie “Princess Leia” Fishers boob and soon forgot what I was looking for! Since I have the attention span of a gnat and a brian to match, the search was abandoned. Usually, what  happens with kind of thing  is I end up with my pants …oh, never mind.

Holy Cow, this animation by BLEW MY MIND! OTAKING77077‘s animation which let me remind you, is a “Work In Progress” , thankfully got leaked out onto the World Wide Web for us to enjoy. I must confess I’m feeling a bit torn about the whole thing. On one hand, as a fellow artist I know what its like having a project that isn’t finished, not quite up to snuff and would rather not show anyone just yet. Then on the other hand… HOLY SHIT! Pardon the expletive, I don’t usually go in for that sort of writing but… HOLY SHIT! This is some of the BEST (hands down) Star Wars animation I’ve ever seen…and I’m counting “The Clone Wars” which is put out by a Lucas Arts professional  team to the the very first time I saw Boba Fett in the animated portion of the Star Wars Christmas Special to EVERYTHING in between! It blows my mind that this is only one person…at least thats the information I have come up with this late at night, I maybe wrong  as I’ve been know to be that from time to time (more often than not)…but if its true, this person single-handedly shamed Lucas and his band of merry men.

The audio is  a little rough…meaning that there is no dialogue and score needs to mixed a tad better but WHO CARES! There is just enough audio to go with the visuals for the piece to be AWESOME!

I just found out that the audio was laid in by an amazing fellow who randomly messaged  OTAKING77077  asking If he could add audio to the piece. Well done, I detract my previous statement! ~Blaque

Check it out for yourself in the Video and Gallery  portion below. I’ve also added and an extended gallery so you can stop and stare at the quality of some the frames like I did. I can’t wait to see this final piece, I KNOW I will enjoy the final piece even though I’ll have watched this video a million and one times by the time it comes out.

The last thing I have to say about this artist  is in the voice of Jedi Master Mace Windu is : “DAMN, the Mother Fucking Force is STRONG with this one!”