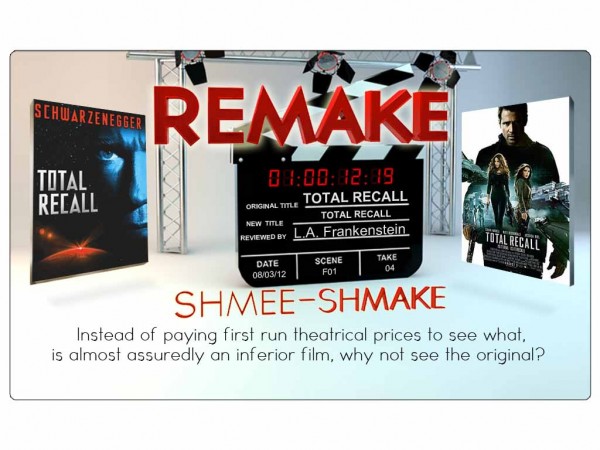 The theatrical box office (especially on a film’s opening weekend) is like Hollywood’s voting booth.  When you buy a ticket for a remake of a classic film you’re telling film producers/studios that you want more of the same, you’re showing there’s a demand, making them respond by continuing the supply.  The old saying for political elections, “if you don’t vote you have no right to complain” works backwards in The Industry…If you DO buy a ticket you have no right to bitch about the lack of original films coming out.

This is why I started Remake Shmee-Shmake, because OLD MOVIES FUCKING ROCK, and unless you’re Quentin Tarantino, you haven’t seen enough of them.

Instead of paying first run theatrical prices to see what (let’s face it), is almost assuredly an inferior film, why not rent/stream the original?  Or, if not, try one of my similar feeling choices below!  You’ll get a better movie, save money, and help dissuade Hollywood from constantly rehashing the same product. Just (re)imagine the savings!

Why the Original’s Great:  It’s one of the great 80’s sci-fi action flicks… full of twists, one liners, and bloody bloody violence.(and yes, I know it was released in 1990, but it’s an 80’s action flick in every way but chronology) 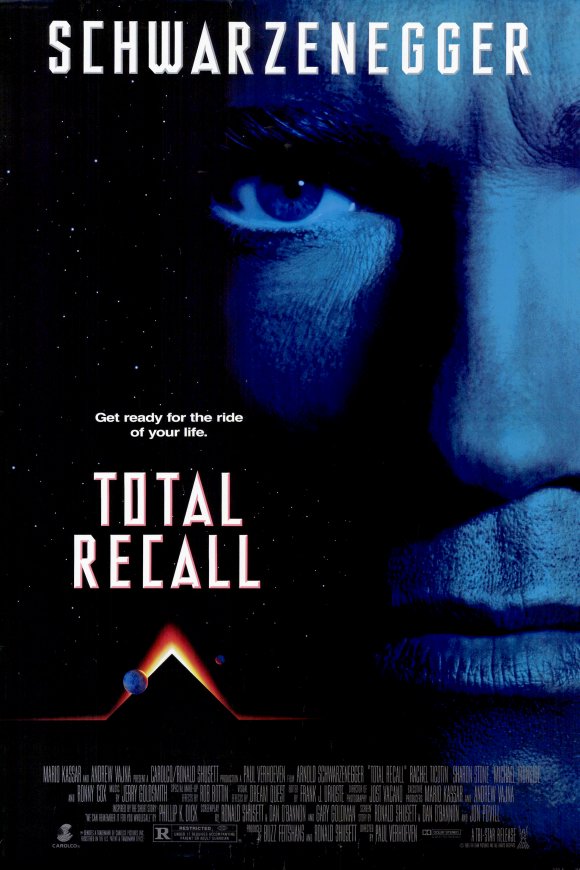 Arnold plays a half human half Na'vi in this Avatar prequel

In the 50’s it was popular in science fiction for “earth” to fight a monster.  If it wasn’t the damn Triffids it was THEM giant ants, or a Beast from 20,000 Fathoms or some kind of Saucer Men…Then in the late 60’s and 70’s single invading evils got replaced by shitty dystopian futures and a hero rebelling against the inevitable.  Suddenly the system was the bad guy and you had to pack your fashionable silver lamé backpack full of Soylent Green for your Logan’s Run past those damn dirty apes!

By the time we get to the 80’s, the science fiction ideal had largely become:  Get a thought provoking idea and then shoot the shit out of it.  How can your son send you back in time to knock up his big haired mom? 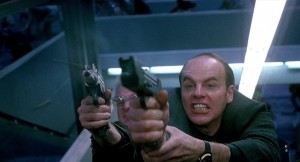 While I would say that 1991’s Terminator 2 ended this trend, Total Recall is arguably the peak of it.  Arnold Schwarzenegger, of course, plays the Arnold Schwarzenegger role.  Ahnold was always kind of a movie star’s movie star.  Like John Wayne or Charlton Heston, if you cast him, you don’t try and make him disappear into a character, you change the character around to fit the star power he’s bringing.  (Orson Welles found out what happens when you try on Touch of Evil…Heston doesn’t so much play a Mexican sheriff as he plays Heston in brownface.  (He’s great in Evil, but you never quite buy him as a Mexican sherriff)

The lead character in Total Recall  was originally written as an accountant, but changed to construction worker to better fit Arnold’s calculator hating physique.  He’s a regular Joe with big dreams of adventure and 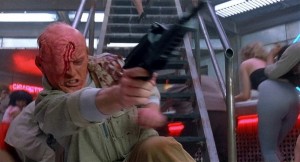 Hide your Meth! Under the mutant makeup is Dean Norris…Hank from Breaking Bad!

Mars…or is he maybe a secret agent working for a Martian dictator?  That’s one of the best things about the movie, it gives you evidence for both cases, and before you can make up your mind which option is true, somebody’s getting chunks of their chest blown across the room.  While he’s trying to not be one of the aforementioned chest-hole types, Quaid(Arnold) is having secret meetings with mini mutant militia leaders, pulling testicle-sized tracking bugs out of his nose, and getting his ass kicked by gorgeous, sweaty, spandexy Sharon Stone.  OH, and did I mention lots and lots of running, shooting, screaming, bone-breaking, triple nipple flashing, and even the occasional car that explodes for no reason whatsoever.

So if you like your sci-fi exciting, your action R-Rated, and your fake blood non-digital, this is the popcorn cruncher for you!  And speaking of the blood…the special fx that is…Total Recall was given a Special Achievement Award Oscar for the visual effects.  While, yes, there’s great fx all around, there is one famous bit toward the end that’s a bit silly looking. 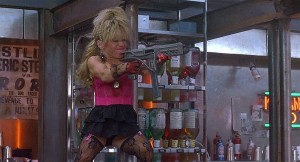 And if you weren't sold yet…well come on!

What to See Instead(of the remake): 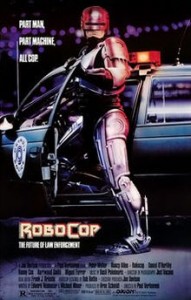 Bukaroo Bonzai stars as the cybernetic policeman of the title, who isn’t quite sure who he is , may kill Ronny Cox, and winds up shooting the shit out of everything…getting the Recall connection yet?  Being a product of the 80’s there’s naturally a few unnecessary one liners, but there’s also a lot of hilarious satire of 80’s “excess” culture.

Alex Murphy’s a good cop who gets transferred to old Detroit, and is immediately killed for his trouble.  Did I say killed?  I mean beaten, tortured, and brutally shown what it feels like to instantly have a three inch hole in your skull.  Some of the Murphy chunks are put together into a cyborg…a Robo-Cop if you will, whose job it is to clean up old Detroit.    Naturally, there are men with BIG, BIG, guns who aren’t too fond of this, and if they weren’t bad enough, he’s also got the cops and a menacing, malfunctioning, mini-mecha’s trying to re-chunkify him.

Director Verhoeven calls it a Christ allegory, and while I think that’s over-stating, I would easily call it one of the great sci-fi action films of the decade…so if you’ve never seen it, but enjoy the likes of Aliens, The Terminator, or The Thing, check it out post haste!  (also there’s been heavy talk of a remake coming out next year, so this Shmee Shmake may have a sister column coming)

Already Seen That One Too?  Try: 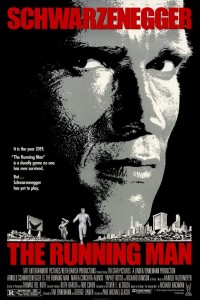 THE RUNNING MAN  –  It’s the ultimate in Event TV!  Somebody dies, every night, live.  In a typical dystopian totalitarian future, The Running Man is the most popular show on TV.  It’s a game show like American Gladiators that uses convicted criminals as contestants and gives real weapons to the comic book style “Stalkers” they face off against.  If the convicts get across the Game Zone alive, they get a pardon…supposedly.  In a move that always get a laugh from the over 30 crowd, the host of the show is played by Richard Dawson, who was the original host of The Family Fued…back when it was a popular show and not a mid-afternoon alternate to a half dozen judge shows.

Ah-nold stars as Ben (don’t call me the Butcher of Bakersfield) Richards, an innocent man in prison, and naturally, soon to show up on The Running Man.  This is solid late 80’s Action/Sci-Fi/Schwarzenegger here…(and if you’re too young to know exactly HOW big this guy was, my spell check just corrected me as I misspelled his last name.)  It doesn’t have the flash, or budget (to be honest) of Predator or Total Recall, but it’s a fun flick, and hilarious as a precursor of modern reality television…I mean tell me we’re not about ten years away from this show actually happening…Oh, and just as a fun aside, this movie’s got the best head  explosion since Scanners, which was the best one since Dawn of the Dead, which was the best since…Hmm, I wonder if DotD was actually the first on screen head explosion?  Doesn’t sound right, but I’m racking my brain (and incidentally taking up valuable blog space) and coming up with nothing.  And if any of this sounds like The Hunger Games, well, it should.  Ben Richards would kick Katniss’sss’s ass…though I’d rather see Schwarzenegger in her leather jacket and her in the yellow spandex onesie. 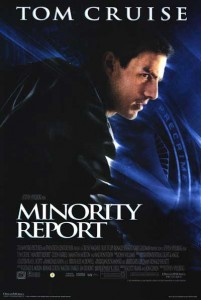 MINORITY REPORT  –  This one’s got Tom Cruise and latter day Steven Spielberg, but is still good…despite…well never mind.  I’m not going to put in spoilers here, so I’ll just say I’m not fond of the ending.  Nor do I dig the shifting tone, which sometimes starts to creep into a killer Blade Runner feel, but the snaps back and beats us over the head with how much Tom Cruise loves his kid.  When was the last time Speilberg made a movie where nobody hugs a kid?    Also based on a Dick story (Phillip K. that is) Minority Report shows us one of the more realistic visions of the future ever put to film.  There’s no totalitarian government, or space ships to Mars or anything, it’s a lot like today, just with more gadgets.  Cameras and retinal scanners are everywhere, but not for Big Brother to keep an eye on you, they’re for the Gap to properly advertise sweaters and shit.  The story centers on the moral question of “If you knew that someone was going to commit a crime, is it right to arrest and charge them for it BEFORE they’ve actually done anything?”  That’s why Cruise is running.  He, and everybody else at Pre-Crime, have seen that he’s going to murder a man he’s never met, so in the major fallacy of the piece, instead of driving to Pittsburgh where he can’t possibly fulfill that destiny, he hangs around trying to solve the mystery.  Coincidentally, since I’m recommending this instead of the new Total Recall, it happens to be one of Colin Farrell’s first big movies…so go back and watch him here, before he became king of the remakes.  Essentially just an innocent man on the run movie with a lot of gadgets, it’s probably better than you’re expecting, except for the ending. 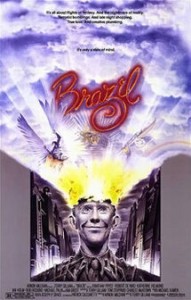 BRAZIL  –  Terry Gilliam is on a different level.  Somehow he clacked his coconuts together enough and out came one of the coolest movies you’ve ever seen.  In a way it’s the art house version of Total Recall…They’re both about a regular guy that dreams of being a hero, is on the run from the government, gets rescued by a resistance group, and may be crazy.  Similar as they are, in every way that Recall is bright, flashy, and action packed, Brazil is ponderous, satirical, and weird.  It’s also got one of the greatest Six Degrees of Separation casts since JFK, with a future Bond villian working for Ash from Alien, while falling in love with the chick from CHUD, and getting hassled by Sir Galahad the Pure, Professor Horace Slughorn, and Super Mario himself!  All that AND Bobby DeNiro!  If you haven’t noticed, I’m trying to entice you without giving away too much plot, so I’m stopping now…just take my word for it…go watch Brazil.

Disclaimer: The views and opinions expressed in these articles, blogs and podcasts are those of the individual authors and podcasters. They do not necessarily reflect the policy or position of AlienCyborgs.com, their hosting company or any other of their affiliates. These blogs are intended as entertainment and opinion pieces only. These blogs may contain strong language, sex and control substance use, these blogs are meant for a mature audience only.