The theatrical box office (especially on a film’s opening weekend) is like Hollywood’s voting booth.  When you buy a ticket for a remake of a classic film you’re telling film producers/studios that you want more of the same, you’re showing there’s a demand, making them respond by continuing the supply.  The old saying for political elections, “if you don’t vote you have no right to complain” works backwards in The Industry…If you DO buy a ticket you have no right to bitch about the lack of original films coming out.

This is why I started Remake Shmee-Shmake, because OLD MOVIES FUCKING ROCK, and unless you’re Quentin Tarantino, you haven’t seen enough of them.

Instead of paying first run theatrical prices to see what (let’s face it), is almost assuredly an inferior film, why not rent/stream the original?  Or, if not, try one of my similar feeling choices below!  You’ll get a better movie, save money, and help dissuade Hollywood from constantly rehashing the same product.   Just (re)imagine the savings!

Charley Brewster lives a pretty typical high school life.  He’s failing Trig, has an overprotective mom, a shitty car, and a girlfriend who won’t put out.  THEN Jerry Dandridge moves in next door.  Charley and Jerry don’t get a long too well since Charley’s peeping tendencies reveal that his new neighbor is a hooker draining vampire!  Mr. Dandridge, not a fan of peeping toms, flirts with Charley’s mom, trashes his car, and seduces his girlfriend, leaving him to enlist the help of late night horror host Peter “the great vampire killer” Vincent to try and clean up the neighborhood.  Dandridge steals Charley’s girlfriend Amy (though by steal I mean glamour/seduces her) takes her home and gives her a bit o’ the old double penetration!  Now our heroes must kill the vampire before dawn to save her.  Can Peter Vincent break out of his cowardly actor role and truly become a Fearless Vampire Killer?  Can Charley resist the temptations of his now crazy sexpot half vampire girlfriend?  And what’s the deal with all the apples?  Watch and learn!

Stephen Geoffreys as Charley’s friend “Evil” Ed Thompson. In turns hilarious and piteous, Geoffreys gives a memorable performance that really should have launched his career, at least within the genre.  Evil is one of those great horror movie comic sidekicks who, in an alternate reality in my brain, has a standing Friday night D&D campaign with Radish from Final Exam, Randy from Scream, and the Frog brothers.

Roddy McDowell is fantastic playing what is basically an homage of Peter Cushing, and the snippets we get to see of his old Hammer style films are killer.

Before I finish praising Fright Night, I have to stop to mention The Man himself…Chris Sarandon as Jerry Dandridge.  You can watch every vampire movie ever made and not find another vamp who’s as much of a pimp as Jerry Dandridge! Unlike the snarl-and-get-staked vampires of Blade/Dusk/Buffy, or the “aristocratic monster” vamps like Dracula/Lestat, Mr. Dandridge casually and confidently strolls around seducing girls and kicking ass, mostly while wearing a sweater.  This guy is just the coolest.

Fright Night is one of the great 80’s horror comedies the likes of which just don’t get made anymore…on that note, I sincerely hope I don’t have to sit down at my laptop anytime soon to review others from that category, like Night of the Creeps, The Re-Animator or Evil Dead 2. 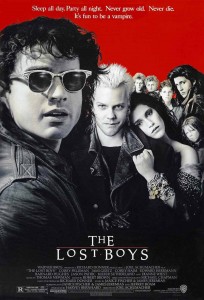 THE LOST  BOYS – Also funny and sexy with great FX and 80’s style.  Teen brothers Michael and Sam (and popular movie mom Diane Weist) move to Santa Carla California, a hip beach town that also happens to be the “murder capitol of the world.”  Michael falls in with a gang of hair rock looking biker vampires, while Sam befriends the Frog brothers, two local teens earnestly and amusingly dedicated to ridding the world of bloodsuckers.

Yes, it does star Corey Haim, which can make some scenes hard to watch…that is unless you’re one of the many now 30 something women who had their first tween sex dream about the self named Haimster.

And another note on casting…If you’re on the young side and just finished watching this movie, I’ll save you a trip to IMDB…Yes, that is Jack Bauer…Yes, that is Rory Gilmore’s grandpa…and Yes, that is “the other guy from Bill and Ted who’s NOT Neo.”

Already Seen That One Too?  Try: 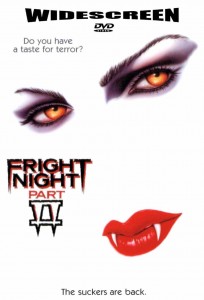 FRIGHT NIGHT II, 1988 – Charlie and Peter Vincent are back from the original, with Charlie now a college student who through much psychoanalysis believes that the events of the first film were largely a hallucination.  A sexy female vampire rolls into town with a whole gang of comic relief monster sidekicks and just happens to have a hate on for Charlie.  Much of the same type of fun as the original, but with more comedy and worse hair.
Starring:
Roddy McDowall as Peter Vincent
William Ragsdale as Charley Brewster
Traci Lind as Alex
Julie Carmen as Regine Dandridge
Jon Gries as Louie

BITTEN, 2008 – Jason Mewes (as in JAY & Silent Bob) is a late shift EMT who finds a twitchy blood covered babe in the trash one night.  Assuming she’s a junkie, he takes her in and cleans her up, not realizing how hard it is to kick a vampiric blood addiction.  Things take a fang and profanity filled Little Shop of Horrors style turn for the worse as he has to spend all his time trying to keep her happy and well fed. Mewes is hilarious as always and Erica Cox is great as the sexiest vampiress since Salma Hayak’ Santanico Pandemonium.
Starring:
Jason Mewes as Jack
Erica Cox as Danicka
Richard Fitzpatrick as Roger
Jordan Madley as Sherry 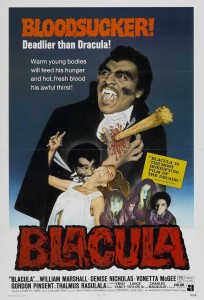 BLACULA, 1977 – If you’re not a blaxploitation fan, this one may be a surprise for you.  I can just hear some of you saying “Wait, Black-ula…like Black Dracula?”  Yup.  William Marshall plays Prince Mamuwalde, an ancient African vampire sired by Dracula who accidentally winds up in modern day California and decides to try some sun ripened American blood while (typically) skirt chasing a lookalike of a former love.  Good stuff.
Starring:
William Marshall as Blacula
Vonetta McGee as Tina
Denise Nicholas as Michelle
Thalmus Rasulala as Dr. Gordan Thomas

…And remember:  If you absolutely HAVE to see a remake, buy a ticket for some other, more original film, and then sneak in to the remake’s theater.

All Images, Logos, Characters, Trademarks and IPs are property of the respective production companys and are not owned by Aliencyborgs.com