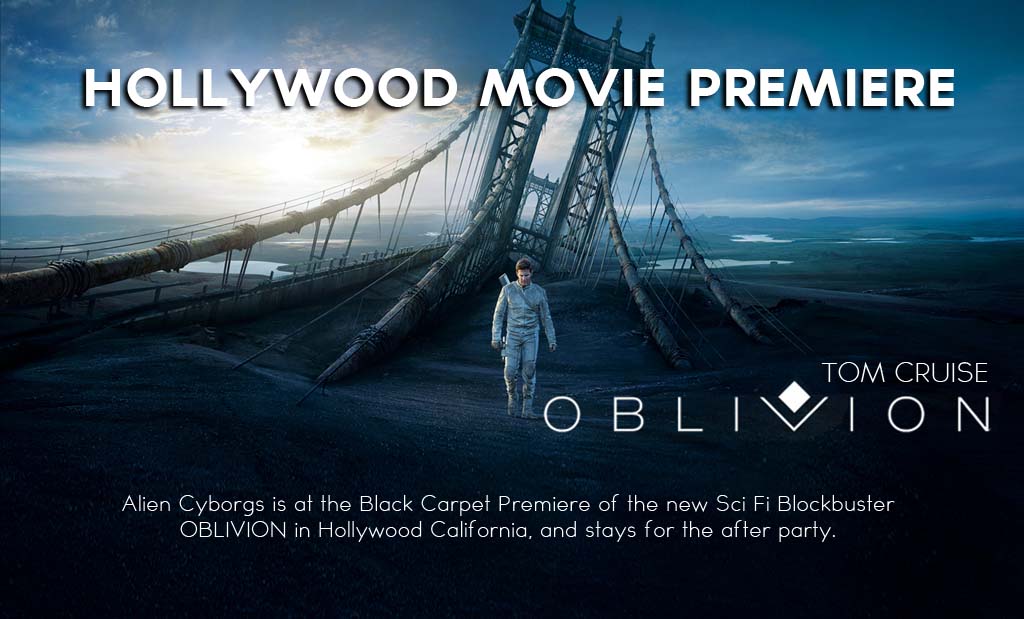 Tom Cruise stars in OBLIVION, an original and groundbreaking cinematic event from the visionary director of TRON: Legacy and producers of Rise of the Planet of the Apes. On a spectacular future Earth that has evolved beyond recognition, one man’s confrontation with the past will lead him on a journey of redemption and discovery as he battles to save mankind.

The stars came out Wednesday in Hollywood to walk the Black Carpet for the World Premiere of the new Tom Cruise Sci Fi Block Buster: “OBLIVION”. The preimiere was held in the heart of Hollywood at the Hollywood and Highland location of the Dolby Theatre across the street from Disney’s El Capitan.

Alien Cyborgs Field Correspondent “Whitey” was at the event and the after party, shared some photos and tidbits with those us who couldn’t make it. Fans lined Hollywood Blvd in front of the Dolby Theatre to get a chance to see some of the films stars like Morgan Freeman, Nikolaj Coster-Waldau (Game of Thrones), Melissa Leo, Olga Kurylenko (Quantum of Solace) wave at them and maybe snap a picture from far away.

Whitey reported that Tom Cruise, who was looking dapper decked out in a grey turtle neck and suit took his time to sign autographs and snapped pictures with star struck and appreciative fans.

Universal Studio did something a little different for some lucky fans, they created the “Oblivion Experience”. “The OBLIVION EXPERIENCE allowed a few lucky fans a rare chance to see actual props from the groundbreaking new film starring Tom Cruise. All are welcome to come and see the Bubbleship, Drone, sleep pod and Cruise’s costume from the movie, as well as walk the black carpet  just before the superstars do. Fans who attend the experience will have the opportunity to win tickets to that evening’s premiere screening at the Dolby Theatre and watch the stars’ arrivals on the carpet.”