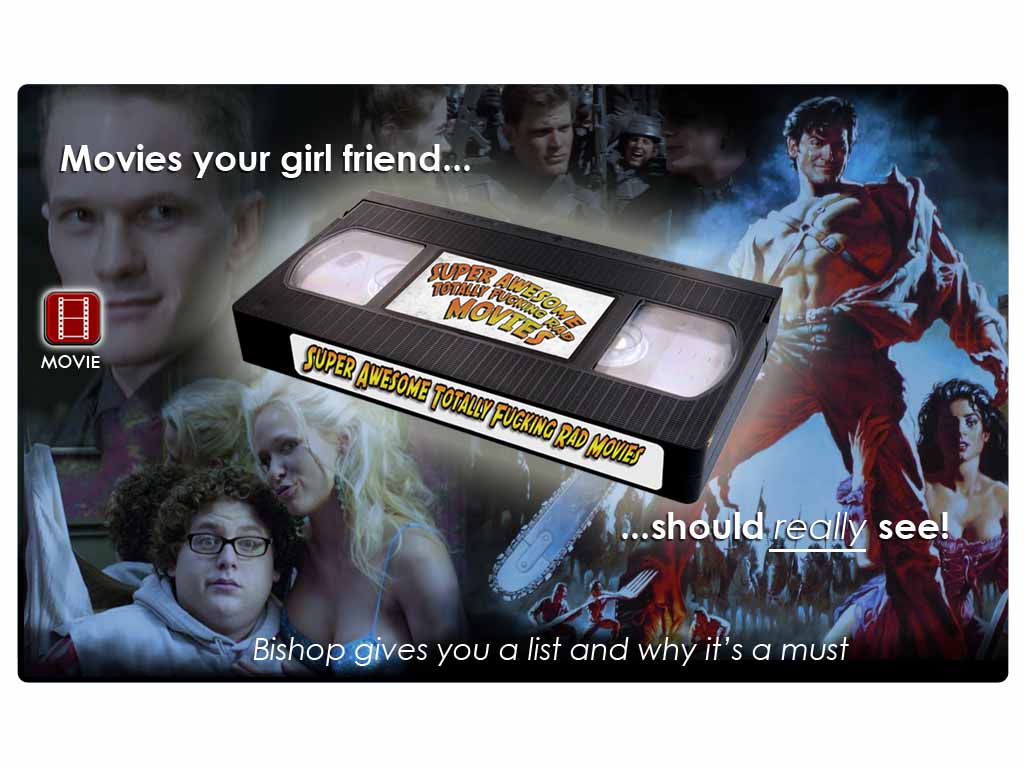 [dropcap]E[/dropcap]ver been driving and you say something like “Gimme some sugar baby” getting a little chuckle from your girl but not the LOL reaction you were hoping for? Ever wonder why you didn’t get the desired effect from that Bruce Campbell Gem? It’s becuase your girlfriend probably has NO IDEA where that line came from or who Bruce Campbell is. Here are movies that will help end those moments of awkward silence between you and your “Geek Hottie in Training!”

Summary:
Bruce Campbell delivers one of his most, if not THEE MOST, memorable performance of his career! Sam Raimi, (Hercules, Xena, Spider Man) an early adopter of GREEN SCREEN, uses unique camera angles and innovative ideas to transport ASH (CAMPBELL) to a medival time where the book of the dead, The Necronomicon, bound in skin and inked in human blood, has tainted the people spreading a great evil throughout the land! It’s up to Ash, his chainsaw arm, and his BOOMSTICK to protect the book of the dead from the evil “Deadites” and the wrong hands if Ash hopes to not only save the world from a living hell but to get himself back to his own time!

Summary:
In a time where latinos rule Earth, the beautiful city of Buenos Aires is wiped off the face of the planet by an intentional bug meteor hurled from another galaxy by Arachnid aliens who are hell bent on wiping humans out! It’s a time of one Federal Galactic government, interstellar space travel, and co-ed showers!!!! Neil Patrick Harris (Dr. Horrible’s Sing-along), Denise Richards (Wild Things), Jake Busey (Tomcats), and a few other B actors pull this cast together into something that only legends are made of, you gotta see it to believe it!

Where’s that from?:
– “The only good bug is a dead bug” (Good when you kill a spider in front of your gf!)
– “Come on you apes! You wanna live forever?”
– “Welcome to the roughnecks…Rico’s Roughnecks! WOOT!” (Also Radchick Roughneck’s is acceptable)
– “They aren’t much to look at when you scrape them off your boot”(see first quote)
– “I’ll take the job, until I die or you find someone better.”

SUMMARY:
From the guys at Happy Madison Productions, A down on his luck 30-something video game tester and his friends have a great time getting high, playing video games, and partying with Grandma!! You gotta check this flick out! Tons of laugh out loud moments, Jonah Hill sucking on some big boobies, Nick Swardson in footie pajamas and a car bed, some cool ass pot smoking senior citizens, and even a Kung Fu Monkey!!

Editor’s note: This isnt just for Guys and their girlfriends, all you Geeky woman out there can turn your non-geeky boyfriends on to these movies too. The title should probably read “Movies your significant other should see”. We here at AC are not sexist in anyway…SEXY maybe, but not Sexist!

All Images, Logos, Characters, Trademarks and IPs are property of the respective production companys and are not owned by Aliencyborgs.com

One thought on “Movies Your Girlfriend Has to See!”