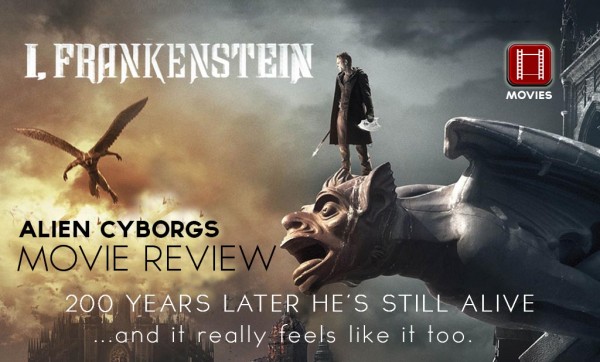 Synopsis:
Dr. Victor von Frankenstein creates  the creature “Adam” who kills his maker’s wife after reneging on a promise to create Adam a bride. Victor vows to undo his creation, hunts Adam and tracks him to the North Pole. In his attempt to dispatch the “abomination”  Victor meets his end from exposure to the harsh elements. Adam buries his maker/father and seeks a life of solitude away from all human contact. In his quest for solitude, instead of finding peace, Adam instead finds himself caught in the middle of a centuries old battle between good and evil. 2oo years later, he finds a way to end the war and live his life in peace.

Review: Lion’s Gate released I, Frankenstein starring Aaron Eckhart (Harvey Dent/ Two Face BATMAN: The Dark Knight) this past weekend to a somewhat warm opening at the box office (#5). The movie starts by riffing off of Shelly’s horror classic in the initial origins phase of the movie but then spins off in a different direction. The movie thematically borrows a “hand” from this movie, a “foot” from that and “leg” from the other one. Keeping in the mishmash motif of Frankenstein…the only thing this movie was missing was a brain.

I, Frankenstien has an overwhelmingly familiar feel of Underworld, largely due to the fact that Kevin Grevioux who wrote the screenplay to Underworld also penned the screenplay to this movie. Add to that fact that Billy Nighy who played Victor, one of the three ruling “Methuselah’s” in Underworld also stars in this project. Finally, add in that the heavy handed use of the line “FROM THE PRODUCERS OF UNDERWORLD” and it’s a wonder how we can’t mistake the two movies. Ok, we get it, its like Underworld, but it’s not.

In 1795, shortly after Adam buries his father/maker Victor von Frankenstein in the wastelands of the north pole, he wanders to the farthest reaches of the globe to live well away from any human contact. In his quest for solitude, he encounters and kills a band of roving demons and finds himself smack dab in the middle of an Angelic War. Leonore played by Miranda Otto (Éowyn LOTR: The Two Towers) informs Adam that the Archangel Michael has charged her and her small cadre of gargoyle-angel-warriors (gargoyles…really?) to watch over and protect the world against demons. Having been “drafted” into the service of the gargoyles, Adam spends the next 200 years fighting demons.

Billy Nighy (Victor, Underworld) and Kevin Grevioux (Raze, Underworld) play their parts better than well and as stated previously, really make the movie feel like an Underworld spin off.

The art direction left a lot to be desired, at first glance it’s hard to tell the difference between the good guys and the bad guys. The demon make-up was mediocre, making it feel like the bad guys were just actors wearing latex masks. The visual effects and the story was luke warm, the costumes are passable and as a “Saturday Nite Popcorn Muncher”, it was what it was.

Just a  small note on the 3D aspect of the movie: the 3D did nothing to advance the experience of the movie, it did not make or break the film. In truth, having to wear the glasses bothered me more than anything. I wasn’t looking for any cheesy in your face tactics but it also didn’t add a sense of depth. So whats the point of it at all. Unfortunately, the only part where the 3D actually “popped” (pun intended) was in the beginning and end title sequences , other than that…meh.

LAST WORDS:
I saw this movie last minute on a saturday night, it was a choice of this or the blood sucking high school saga, geared to young adults…Vampire Academy. “I Frankenstein” had half decent affects and the story was hum drum and very predictable. One part Gargoyles (the 90’s animated T.V. show) , one part Underworld, one part Van Helsing and the tiniest dash of Shelly’s Frankenstein, it would have been great to say the this movie was greater than the sum of its parts…unfortunately, I can’t. Having said that, if you REALLY  liked Underworld and all of the sequels there after, chances are pretty damn good that you will like this movie. It’s a brainless monster fun.