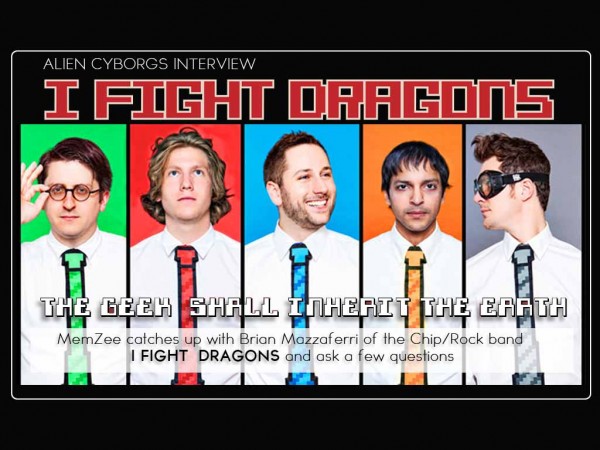 I FIGHT DRAGONS: The Geeks Will Inherit The Earth I Fight Dragons: The Geeks will inherit the Earth.

The new I Fight Dragons album “KABOOM!” has a lot of capital letters, not to mention an exclamation point, which makes it very exhausting to pronounce, but quite invigorating to listen to. It is a Photo Finish / Atlantic Records release (wha!?!?), and serves as the culmination of their earlier sonic endeavors undertaken with their first two EPs, 2009’s “Cool Is Just A Number” and 2010’s “Welcome To The Breakdown.”

The band has a familiar sound…much in the way that anything “good” resonates with your sensibilities and strikes the awesome chord. Maybe its the catchy melodic pop/rock sound that always brings to mind some youthful time when things meant so more than they really were. Maybe its the “chip tune” aspect to their music, that familiar and comforting 8bit Game Boy sound that harkens back to a time when your only problem in life was trying to rescue Princess Peach…whatever it is, I Fight Dragons ROCKS!

For those of you not in the proverbial ‘know,’ ‘chiptune’ is new music created on ‘obsolete’ video game ‘soundcards’ such as the Nintendo Gameboy. Now you’re in the ‘know. ~ IFD Brian, Hari, Chad and Bill all hail from Chicago, while Packy hails from Outer Space (by way of Chicago)

Alien Cyborgs contributing editor MemZee was able to catch up with Brian Mazzaferri (lead vocals) and ask him a few questions abut music, The Warped Tour and the future!

MemZee: What inspired you to go with such a niche in music?

Brian: Honestly, the sounds themselves (chiptune that is) really spoke to me. It was a huge moment when I started discovering the chiptune community and all that people had done and had made possible. I truly love the sounds made by Gameboys and Nintendos.

M: What artists do you listen to?

M: How did you go about getting on the warped tour?

B: We’ve wanted to play Warped for years. We got lucky enough to win a spot on the 2009 Chicago date (we’re from Chicago), and that show was actually quite instrumental in getting us our booking agent, who was able a couple of years later to get us a spot on the whole tour (and a huge thank you to Kevin Lyman for having us!)

B: I’d say the craziest thing that has happened so far was in Ventura, CA where the crowd broke into a spontaneous slow-motion gentle mosh pit which also included slow-mo air sword fighting. We’ve never really had anything like that happen at our sets and it was nutso.
As far as on our days off we were also just given an after-hours guided tour of the Smithsonian’s “The Art of Video Games” exhibit by its creator and curator, which was a huge honor and was an amazing experience.

M: What are your plans or dreams for the future?

B: Time travel. Also international touring, but as long as we invent time travel I figure we can make that happen too.

M: What comic or game related characters are your favorites?

M: Any additional information you’d like to sure please let us know do we can share it with our community?

B: Always bring a towel.

M: Thanks again and have a great time finishing the tour, be sure to hit us up when you have any new music coming out!

THE GEEKS WILL INHERIT THE EARTH and cRaZie$

I FIGHT DRAGONS “SAVE THE WORLD, GET THE GIRL”

Editors Note ~ A Very Special “Thank You” goes out to Mem Zee for putting in the work and getting er’ dun!