In a Galaxy, in my underwear, for 8 hours straight… 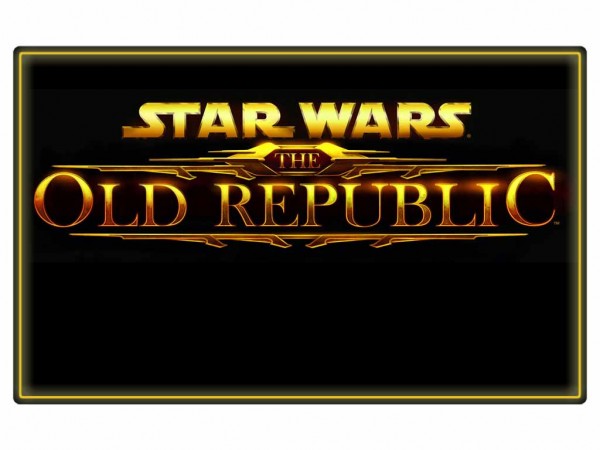 Ok, so its a few weeks late but I like to do that intentionally when it comes to these “blockbuster” releases. I hate server and game issues due to lag and over-crowding. I’ve been a part of enough game launches to know, it just suits me better to wait…

So now that that’s clear…’A long time ago in a galaxy far, far away…’ millions of Geeks are losing sleep, work hours and precious masturbation time to the latest from the minds of Lucasarts and Bioware! Let me start off by saying (stands up and starts the slow clap)…Well Done Sirs! I was a beta tester for Star Wars Galaxies and played that game hard-core 4-8 hours a day for a year and a half…it was a good social contraceptive! I can feel my sack starting to cry out in dread of the loneliness it’s going to be experiencing once again because Star Wars: The Old Republic is better than sex!…at least it is right now. 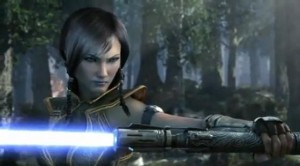 The story starts off with an amazing cinematic of the war between the Republic and the Empire, Jedi vs. Sith thousands of years before the Skywalker story. Brutal, with the always amazing John Williams soundtrack this little intro movie emerges you and preps you for your journey into the Force! 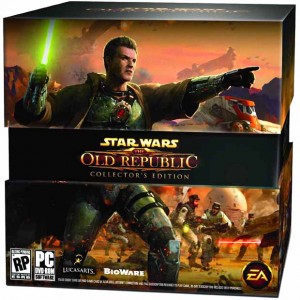 "too much money I sense in you…"

The game-play is very standard MMORPG, click target, click action, recharge, repeat. The “mobs” don’t aggro too easily so going solo, which is how I prefer to play MOST of the time, isn’t so bad. The Old Republic gives you a “companion” to accompany you on your missions so you are never really “solo” and when you are in a safe area you can have them continue to run missions gaining experience in your secondary skills as well as gathering mission items you can trade into vendors. It’s like having an online buddy without having to hear their issues or hear them jabber on about nothing. Thank you Bioware for that one! The moves your character pulls off are brilliant and playing a Jedi Sentinel, I get to wield two lightsabers! I must admit, the first time my character flew through the air to deliver a striking blow to a foe from 50 feet away, really did make me feel like a Jedi!

The computer minimum requirements for this current release of the game are surprisingly low. What this means is you are running low quality graphics and possibly in window mode, but you can get the game to run on most systems! Don’t worry, the game play and story lines are entertaining enough for you to forgive a low poly count…my argument, as always, with anything from music, film AND video games, content over “pretty” will win every time!!!

The grind isn’t too bad, with missions being plentiful, coherent and relatively bug free. Your choices towards light and dark are very obvious, too obvious sometimes. Responses like “thank you” or “Buzz off (attack target)” make the journey a little less profound. I would really of preferred more “grey” responses to make the outcome and consequences a little more dramatic, perhaps showing the player that you really are subconsciously a dark little Sith at heart! The waypoints in missions could use a little work. I often find myself running around with my Map up so I can make sure as to not pass a target. And you can’t decipher between waypoints that are above or below you, sometimes a maddening detail when you are running around hostile territory looking for marker that you are standing over just to see that it’s on the floor above you!

Space is amazing except for the fact that the missions are on “rails” ala ‘Rebel Alliance’ rather than free roam like in SWG, X-wing, and Tie Fighter. This can be a little frustrating when you want to swing your ship around to take out the tie you missed but can’t. The missions can also be a little difficult if you have a stalk ship, but in the Old Republic, your ship, your droids, and some of your armor and weapons can be “improved” with mods and enhancements to add to your characters traits and overall packing power. You can make your light-sabers unique to your taste, just like you would if you were a real Jedi or Sith and also trick out your spaceship with better engines, armor, and lasers amongst other things.

As of now Star Wars: The Old Republic is a lot of what Star Wars: Galaxies should have been, but nothing is perfect. There is a lot of room for improvement in the Old Republic, but it is off to a brilliant start! I look forward to the patches and expansions that are sure to come, and I hope BioWare and Lucasarts are listening to the players this time around! I would love for this latest installment in the Star Wars Universe to have the same successful longevity as its predecessor!

Pirate, Gamer, Writer, Photographer, Film Maker, Editor, you name it I like to do it, wanna do it, or tried it and I'll try it again! 420 advocate with a quick wit and a faster mouse click, ladies yes I'm lookin' at you...