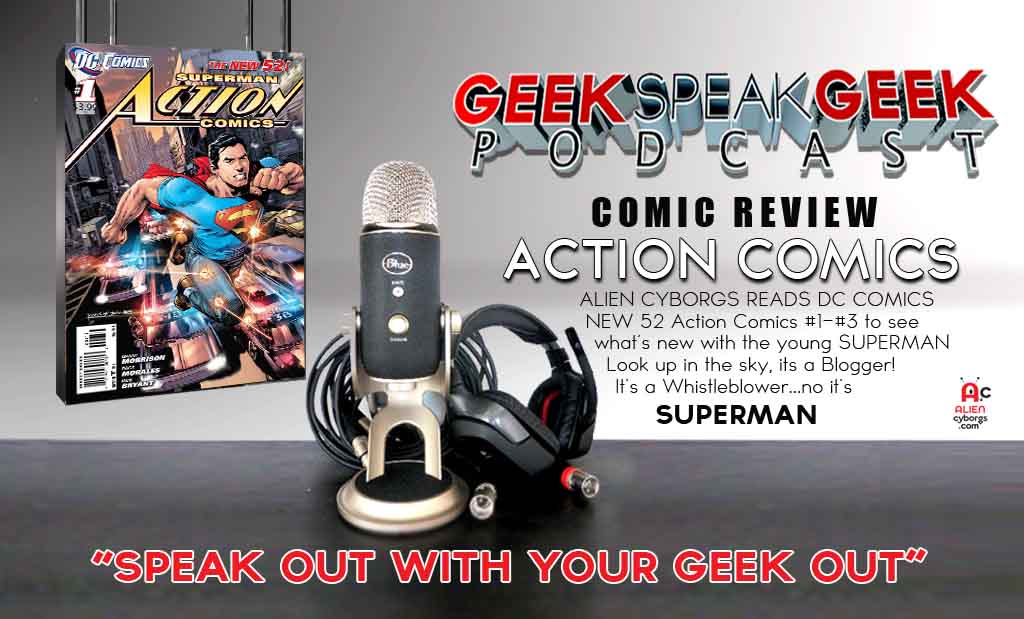 Written by: GRANT MORRISON
Art by: RAGS MORALES and RICK BRYANT
Cover by: RAGS MORALES
Alien Cyborgs takes to the road to scout for a filming location, scours the high desert for a “Long John Silvers” and talks about Superman. Reading the New 52 Action Comics was almost as fun as getting lost in the desert…almost. Listen to the podcast below and watch your step this podcast is full of spoilers. Wait, this comic is almost 2 years old, never mind.

LEAVE  COMMENT BELOW WE MAY USE IT ON THE NEXT PODCAST!

The Alien Cyborgs hit the open road and head for the High Desert of Southern California to go location scouting for a secret lil project. Peter the Swordsman had tasked us earlier in the week to read DC Comics New 52’s release of Action Comic 1-3. Even though its over a year old, Peter felt that this story line could be one that turned Jet Blaque from the Darkseid (haha) and maybe start to like the Ultimate “Goody Goody” Superman.

STORY LINE: The young Clark Kent leaves smallville to make a living in The Big City…New York City! No, wait…thats Metropolis. Where he turns into a Whistle Blowing Do Gooder. Armed with his Superman Tshirt, indestructible cape and his blog, Kal-el is just a normal kid from another planet trying to fit in. That is until General Lane and Lex Luthor try and diesmember him. Peter the Swordsman tries to turn Jet Blaque from the “Darkseid” (heh) and hopes that he will start to like the eternal Goody Goody Superman.  Editors note…Superman is familiar and refreshing, like 7 up. Well, the fact that Grant Morrison wrote Supes in the a Spider-man parallel sure helps too! It’s an OK read…take that with a grain of salt because I hate Superman. Trust me, it could have been worse.

MATT AND CAT HAVE BACK ISSUES is a super secret organization headquartered in the former broom closet of a mylar bag factory…or it’s also possible that They’re a comic book themed podcast. Check out their website and listen to their podcast!