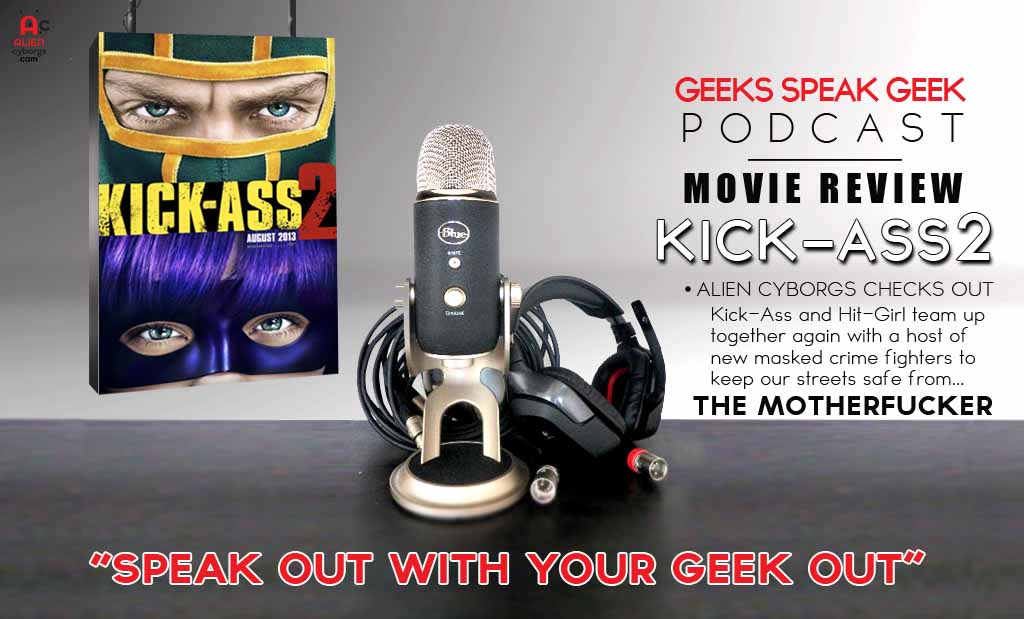 LEAVE  COMMENT BELOW WE MAY USE IT ON THE NEXT PODCAST!

The Alien Cyborgs head out to see the new comic book Action movie, starring Aaron Taylor-Johnson, Chloë Grace Moretz and Christopher Mintz-Plasse. Lots of action, lot of violence and lots Super Heroes?! Then we head back to the Secret Hideout to talk a a grip of smack about the movie.

STORY LINE: After Kick-Ass’ insane bravery inspires a new wave of self-made masked crusaders, led by the badass Colonel Stars and Stripes, our hero joins them on patrol. When these amateur superheroes are hunted down by Red Mist — reborn as The Mother F%&*^r — only the blade-wielding Hit Girl can prevent their annihilation. When we last saw junior assassin Hit Girl and young vigilante Kick-Ass, they were trying to live as normal teenagers Mindy and Dave. With graduation looming and uncertain what to do, Dave decides to start the world’s first superhero team with Mindy. Unfortunately, when Mindy is busted for sneaking out as Hit Girl, she’s forced to retire-leaving her to navigate the terrifying world of high-school mean girls on her own. With no one left to turn to, Dave joins forces with Justice Forever, run by a born-again ex-mobster named Colonel Stars and Stripes. Just as they start to make a real difference on the streets, the world’s first super villain, The Mother F%&*^r, assembles his … Written by Universal Pictures

MATT AND CAT HAVE BACK ISSUES is a super secret organization headquartered in the former broom closet of a mylar bag factory…or it’s also possible that They’re a comic book themed podcast. Check out their website and listen to their podcast!