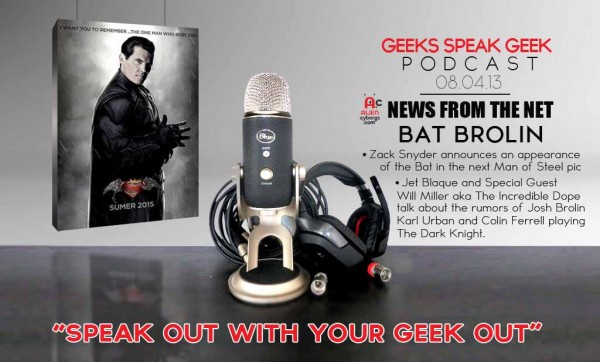 Special Guest, Will Miller aka The Incredible Dope joins Jet Blaque on the mic to talk a grip of shit about the flying rumors. Give this short 20 minute podcast a listen and leave a comment down below!

Zack Snyder announced at the 2013 ComiCon that The Batman would be making an appearance in the sequel to the Man of Steal. Since then it has caused tremors throughout the “Fanboy-sphere” and the internet has been buzzing with speculations of who will be donning the cowl. There are names that are been being tossed around but none have been “caught” as of yet. Bat of Steel? No, wait is it the Dark Man? No…thats been done.

The names that are being tossed around are Josh Brolin (True Grit, MiB3), Karl Urban (LOTR, Judge Dredd, Star Trek), Colin Ferrel (Minority Report, Fright Night, Total Recall)  and most recently Ryan Gosling (The Notebook, Gangster Squad). Who knows who will finally get to play the chin in the cowl, the only thing that The Incredible Dope and I agree on is “PLEASE DON’T FUCK IT UP!”

Check out the Logo Reveal at SDCC

“SPEAK OUT WITH YOUR GEEK OUT!”