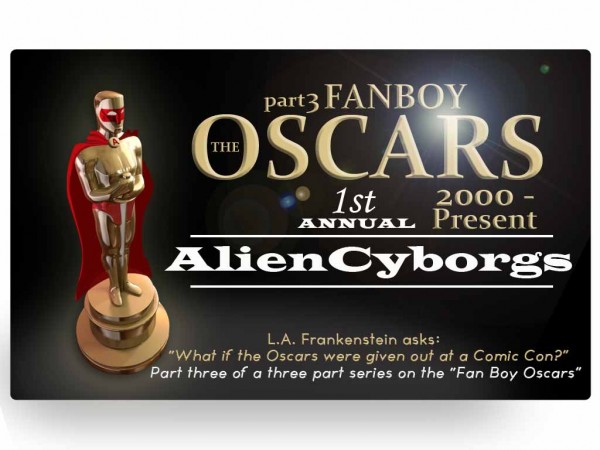 Ah, the new millennium…Dare I call it the Golden Age of Genre Love?  There’s a popular 90’s term you may have heard of called “geek chic”…or you may not, as it’s been rendered obsolete.  In the 00’s, “Geek” has become so mainstream that middle school football players are getting picked on for not knowing how to pronounce “Ra’s Al Ghul.”  Okay, so I don’t know that that actually happened, (But I did once witness a small group snicker at a douchey dude who didn’t understand why “the cake is a lie”)  but the box office domination and critical cunnilingus that films like Dark Knight, Return of the King, and Star Trek recieved prove that the centerpoint has shifted.  Recently, I even strolled past a huge display of pre-faded, form fitting, Kirby era Marvel hero t-shirts at Old Navy. (I feel the need to mention I was X-mas shopping for my niece)  Doctor Doom on a Medium sized (not XXL mind you) shirt at Old Navy?…I think I’ve made my point.

Kidding.  CGI’s both a blessing and a curse.  Gollum…DinoShark.

Every Best Picture listed below has a liberal amount of GGI shots in it, and most of them would have been impossible to shoot without.  It’s the advancement in digital technology (and the fact that the prices went down) that makes these movies possible. For example (and just an example, the info is partially from wikipedia, so get out your salt shakers)  Terminator 2 has 300 visual fx shots and in 1991 was the most expensive movie ever made.  Green Lantern has over 1300.

Anything is possible now, and yet it seems to be having a negative effect on creativity.  Am I the only one who was utterly disappointed to see the last shot of the new Avengers trailer?  You know, the giant flying robo-snake thing that looks conspicuously like leftovers from Transformers/Skyfall/Battle LA?

So just remember, every Ghost Rider has an Iron Man, every Catwoman a Dark Knight, and let’s all just think of our power battery as half full, not half empty, because 2012 looks to be a hell of a year!

Nominees:
The Lord of the Rings: The Two Towers
Star Wars: Attck of the Clones
Harry Potter and the Chamber of Secrets
28 Days Later…

2003 Best Picture:
The Lord of the Rings: The Return of the King

Honorable Mentions: A History of Violence  –  Harry Potter and the Goblet of Fire  –  War of the Worlds  –  King Kong  –  Fantastic Four  –  Constantine  –  The Hitchhiker’s Guide to the Galaxy

Nominees:
Paranormal Activity
Harry Potter and the Order of the Phoenix
Fantastic 4: Rise of the Silver Surfer
Spider-man 3

Nominees:
Thor
Harry Potter and the Deathly Hallows: Part 2
Rise of the Planet of the Apes
Captain America