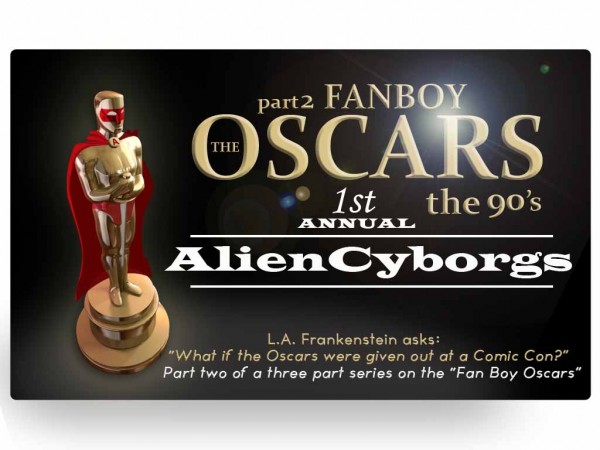 AlienCyborgs is pleased to bring you the second part in a tree part series of the Fan Boy Oscars by L.A. Frankenstein

If you’ll direct your attention to your left, you’ll see that we’ve moved on now into the flannel wrapped box of despair that we call the… 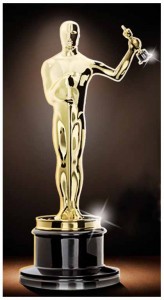 "And the Picard for Best Picture goes to…"

Okay, maybe that sounded a bit harsh…but things undoubtedly took a turn for the harsh in the 90’s.  Hair rock burned out and died faster than Ahnold’s famously upward raised thumb, and their cinematic counterparts didn’t fare any better.  “Hair rock” actioners like Commando and Road House became the celluloid equivalent of “Cherry Pie,” and cherry pie was just too fruity and flaky for the 90’s.  The 90’s wanted things crusty and substantial.  (Okay, I’m getting criminal with the silly metaphors here…I don’t want to go to writer jail)   One last aside though about this shift in artistic sensibilities…I distinctly remember going to see True Lies…the theater, the girl I took (who dug it, KEEPER!)…and I remember thinking it felt like a “comeback” film for Arnold.  (his output was way down from the 80’s and the previous year’s Last Action Hero was the joke of the summer)  Moreso, Tom Arnold’s line in the film, about Schwarzenegger’s bad relationship with his daughter  “Axl Rose and Madonna are her parents” couldn’t feel more out of date to a teenager in ’94.  James Cameron didn’t know, Tom Arnold didn’t know, but if you were 18, you knew that just wasn’t where it was at anymore.

In the beginning of the decade, the shadow of Tim Burton’s Batman loomed large.  Despite it’s massive success, nobody could quite wrap their studio money around how to repeat it with another A-list character, which lead to a handful of lesser know comic properties making the often dull and rubbery transition to the big screen.(“lesser know” demographically I mean…while characters like The Shadow were certainly king shit to the over 40 crowd, your prime movie going fanboys were like “what’s with that stupid fucking fake nose?”)  Thankfully, in the absence of capes,  there were people like David Fincher and Alex Proyas around pumping out gritty pseudo-nihilistic classics.

"You met me at a very strange time" ~ Tyler Durden, Illustration by M.S. Corley

Now if any of this seems negative it isn’t meant to.  I love a shift in tastes that allows characters like Blade or The Crow to get some cinematic love…and if it turns out that the whole decade, everything I ever knew or felt or watched during the 90’s was all part of Riff Raff’s alien buddies and their floating city experiment, or even worse, just a blip of bright green 1’s and 0’s flashing through my pruny pod-living-jacked-into-the Matrix dreams…well Ernest Hemingway once wrote, “The world is a fine place and worth fighting for.” I agree with the second part.

“Hail to the king baby!”

(A note about bias and ranking…I’ve tried to be as objective as possible with this list, so it reflects a pretty honest representation and not just my obsessions with a particular franchise or company. That list would, of course, be Troll shit, and the sewers of the forums are already cracking under the weight of the exploding river of Troll shit. In fact there are a couple of Best Picture “winners” below that I don’t even like. When choosing Best Picture, I took into consideration box office, critics rating, geek obsessiveness, and sustainability…also, I tried to imagine what the actual voting or response to each movie would have been if I really were there in that year polling at Comicon. Example: In 1988, Beetlejuice was HUGE! Everybody knew what it was, and most people loved it. Akira came out the same year, but who saw Akira in the theater? Japanese guys, that’s who. On this side of the Pacific, you probably saw it on a vhs that your Robotech obsessed buddy shoved into your book bag while swearing it’s the coolest thing he’s ever seen. Alternately this list has cases where a movie will be higher because it didn’t do as well theatrically, but is truly obsessed over now, while the same year may have a big hit that’s no longer very well regarded. Always remember, Batman and Robin made money. On paper it’s a success. Now, how many of you would line up at a carnival to buy a $20 ticket at my Punch Joel Schumacher booth? I’m seeing a lot of hands go up!) (talk about a long winded parenthetical, huh?)

OBVIOUSLY it’s impossible to know exactly how people would have voted, and nobody’s calling this list fact…it’s just a list…it’s supposed to be fun…I hope you dig it!

And now… “On with the show” Honorable Mentions:
From Dusk ‘til Dawn  –  The Phantom  –  Bound Keep your eyes peeled for the last part in the three part FanBoy Oscars series by L.A. Frankenstien
Big “Thank Yous” and shout outs go out to M.S. Corley for letting us use his Fight Club inspired illustration “You met me at a very strange time”. Click on this to see a Hi Res image to see more of his artwork go visit his website!