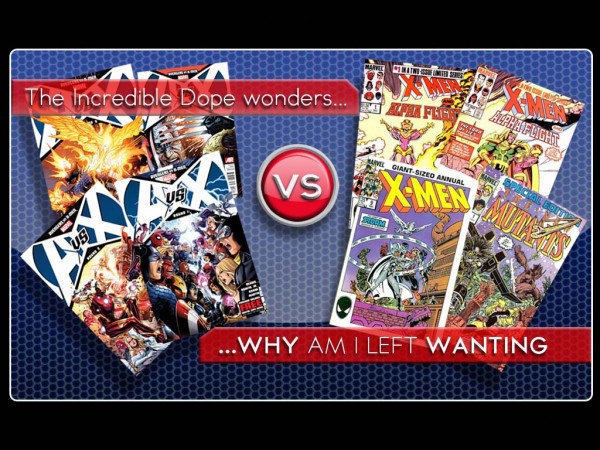 by The Incredible Dope

I haven’t blogged here for a good while and I apologize about that, but I have been reading a lot of comics lately and for the life of me I can’t figure out why. When you’re a comic book junkie you obviously enjoy the form in which the story is told and we’re conditioned to that habit, but I have to ask myself why I do read what I read and still find myself wanting?

In my teens I enjoyed Hip Hop music and I remember listening to it on my Walkman (* portable audio cassette player for out viewer under 20) and whenever an emcee said a really dope verse I’d find myself rewinding the tape over and over just to hear that same verse. Comics back then were pretty much the same way, as I found myself rereading “X-Men Asgardian Wars” at least three times a day. Was it my youth that was intrigued by the fantastic elements which over stimulated my imagination or was it that the quality of the story was just plain better.

Or both? I’m pretty sure it’s both.

Asgardian Wars: The Uncanny X-Men, New Mutants and Alpha Flight vs. Loki and some Asgardians

However, if Asgardian Wars had been told today with the sales plan that stretches a storyline to twelve issues…well, I’d find myself thoroughly disappointed and bored to say the least. Don’t get me wrong, I hate coming on here and sounding like I’m bashing some industry greats, but let’s be honest with each other; has anything actually happened in Avengers Vs X-Men?

For the past decade Marvel has given us the “Event”, which is always branded as “something we planned way down the pipeline which has led us to this”. I think that all the events have been great in their initial concept while some faulted in their execution, and “Avenger Vs X-Men” was bound to be one of those categories.

Avengers versus The X-Men

It’s not a complete fail, far from it actually, but does it really have to take this long to tell a story? I mean besides the side stories that crossover into the regular monthly titles and the “AvsX” line in which we see an Avenger square off against an X-Man like Magneto vs. Iron Man , but ask yourself is this a story of actual quality or does it miss the marks that it aims for.

“Avengers vs. X-Men” is of quality, just like everything else that came before it like “House of M” (damn near a masterpiece), “Civil War” (meh, but it did change the status quo), “Secret Invasion” (cluster fuck) “Siege” (a good story that only took four issues) were awesome concepts…grossly over saturated, but conceptually of quality.

A Collection of stories…some good and some bad.

The overall narrative of “Avenger vs. X-Men” lacks involvement, and by that I mean I don’t give a fuck what happens in the end. For one thing if you like to frequent comic book news sites such as Newsarama and Comic Book Resources in which they display previews three months in advance…well, you can pretty much surmise how things are going to end up. The only consequence at the end of Avenger vs. X-Men that they’re joining to together to form a team and for the most part it looks like everyone is alive (except for the fact that at least one character does indeed die, wanna know…check the spoiler below)

So the big reveal is that Marvel can re-brand the majority of their team books, restart the numberings at one and juggle creative teams (which ain’t a bad thing), but in my opinion so far the only real consequence in this storyline is in issue eight when Namor as one the Phoenix Five destroyed Wakanda in a typical Sub Mariner tempter tantrum. And yes, the Phoenix Force was split amongst five individual X-Men (Cyclops, Emma Frost, Magik, Colossus, and Namor) and I ask myself why those five characters? Was it their close proximity as to when the Phoenix was split? Why was it not divided to some the Avengers as well? And the only real thing the Avengers have to fight against the Phoenix is…mystical Kung Fu?

Let that sink in for a bit… A cosmic life/death force that has plagued the X-Men since the end of quintessential Claremont/Byrne run is combated by the Iron Fist mythos of Kun Lun? Even the characters in the storyline think it’s ridiculous. It’s kind of a cool way to involve another idea into the legend of the Phoenix, but it’s a far stretch to what has been previously established i.e. the M’kraan Crystal, The White Hot Room, The Shi’ar named Korvus who also has a connection to the Phoenix Force.

I feel my questions will go unanswered, but hey we’ve only got two issues more to go till A+X and the Uncanny Avengers right?

Can I recommend that you buy these books? Yeah sure, when comes out as a collected edition which will be most likely one month after this whole thing ends, but it ain’t no Asgardian Wars.

Someone DOES die if you want to find out whom…check out the spoiler below!