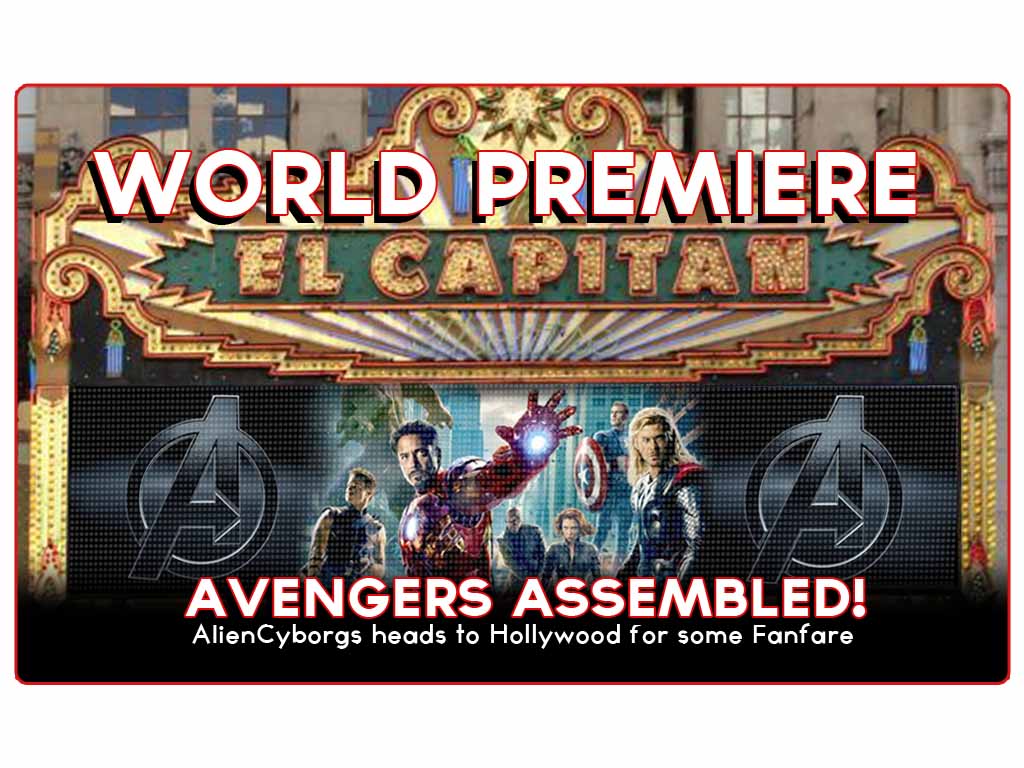 AlienCyborgs heads down to Disney’s El Capitan theatre on Hollywood Blvd in The City of Angels to hang with the fans, Star Gaze and Hero Watch!

Almost 50 years after the release of the first issue of  Marvel Comics “The Avengers” created by Stan “the Man” Lee and Jack “King” Kirby…we stand collectively at the threshold of one of the longest awaited movies to be released in Geek History.

It seems that all the stars fell out of the sky and hit the red carpet for the Avengers Movie World Premiere on Wednesday April 11th.

Chris Hemsworth (Thor) showed up sans a cravat and was literally “head and shoulders” above the crowd, at 6’4″ he towers over most people! Chris Evans (Captain America) looking very brunette, came a bit incognito sporting a beard and buzz cut. He nearly snuck past us and had it not been for some star struck teens screaming his name…he may have flown under our radar.

How is it the one guys gets to be both “The Human Torch AND “Captain America”?! Some guys get all the luck!

Speaking of beautiful, Cobie Smulders (Agent Maria Hill) was there looking, pardon the pun…Smouldering in Dona Karan. Cobie really has a “WOW” factor that could have even mesmerized the Hulk!

The family Skarsgård was in attendance, Stellan (Prof. Selvig in Thor) and son Alexander (Eric Northman in True Blood) giving the fans a double dose of Swedish Delight. Looking less like the God of Mischief and more like a Brit Rock Star, Tom Hiddleston(Loki) arrived looked very smart and very British in his grey fitted suit.

— Entrance of the Year — If there was an “Entrance of the Year” award I would think that Robert Downey jr. (Iron Man) would win by a landslide. RDjr is escorted to the premiere by a motorcade of matte black militarized Acura MDX and TLs sporting S.H.I.E.L.D logos on the doors.(see gallery below) RDjr  rolls up ONTO the red carpet in a brand new Dark Brown/Burgandy ACURA NSX with a New York license plate that read “STARK 33”! This thing actually GROWLED when he stepped on the gas pedal.

Touted as a “Super Car”, The New Acura NSX is truly a Super Car for a Super Hero! Rolling up in that car, the purple italian suit and the swag he had in his step, RDjr really WAS Tony Stark at least for that night!

There were also other celebrities in attendance to watch the Marvel Movie, the “Geek Godfather” Joss Whedon,  Dominic Monaghan (LOST/L.O.T.R.) and Andre Royo (Fringe/ Wired), Erin Grey (Ferris Bueller’s day off) was on the arm of Clark Gregg (Agent Colson) and Bella Thorne (Shake it up!) was also there just to name a few of the celebrities on hand. (See Gallery below)

And of course, the premiere would not have been complete without the prescense of the “All Father Creator” himself Stan “the Man” Lee. He looked even more “Geeked Out” than a lot of the fans, he had a smile on his face that read as… “FINALLY!”

Here is the REELZ Coverage of the Event. One day AlienCyborgs will be on the Red Carpet…until then we have Reelz! And remember: “Make mine Marvel!”

Jet “Blaque” Olaño – likes long walks on the beach and pina coladas but would rather  sit in front of the T.V with a big bag of Jalapeño Cheetos and an entire season of Game of Thrones! Dedicated to Gideon Raio Olaño our lil’ geek in training!