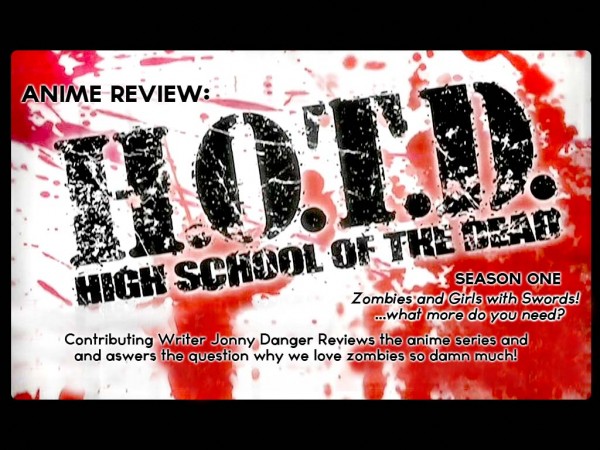 High School of the Dead

“I am going to say right up front, I am not your typical reviewer. Actually, let’s not even use that word. You could barely call me a critic. I love to be entertained by a form of art. I indulge any chance I get. When it comes to starting a new anime series, sometimes you just have to dive right in. You can read a super geeks critical inside review, get opinions from your opinionated friends, or waste hours reading internet forums. But when it comes to down to watching a show for yourself, you have to form your own opinion. I intend to present you with my perspective of each series so that you can go watch it and form your own opinion.  After all, I am one of your opinionated friends.”
~ Jonny Danger I was into High School of the Dead the very first time I saw a screenshot on the web.  Zombies? Cartoon Babes? Violence? I’M IN. The twelve episode run focuses on a group of high school kids, their campus nurse, and their efforts to figure out what the hell is going on, all the while trying to stay alive.

The show tries to be little more than the images it continuously throws in your face from the first episode.  The series is filled with big-breasted babes, violent zombie deaths, and plenty of up-skirt shots. I have to mention some of the typical anime crutches; these high school girls are way too sexy, their titties are way too big (let’s not even talk about the nurse), they excel at various forms of martial arts, and they are crazy for the consummately cool male protagonist, Takashi Komuro. It’s safe to say this is the Tokyo I’d like to be in when the zombie apocalypse arrives.

Gun obsessed, they give him boners.

The story is typical of many zombie flicks; a band of not-so-merry survivors venture from place to place trying to survive.  Sure, they have motives for reaching each destination they seek, but their reasons serve little purpose other than to continue the progression of the tale. There is no overly convoluted sci-fi plot here, just good fun. The thing that kept me looking forward to each new episode was seeing how the characters dealt their new fates, both physically and emotionally. While none of the characters are terribly deep, some are very interesting. Although I am a big fan of the wooden katana wielding vixen Saeko Busajima (I always did have a thing for chicks with purple hair), my favorite character is the gun obsessed (gun otaku for all you insiders) Koura Hirano. The ways in which he constantly gets nerd boners for firearms never cease to get a rise out of me. Unfortunately, the series’ most intriguing characters are not part of the main band of survivors and only play only small supporting roles.

Because this is a fairly new series first airing in June 2010, the animation is top notch. There are often highly detailed, bright, colorful set pieces showcasing the survivor’s new way of life and their efforts to survive the decaying, blood covered zombies. The juxtaposition of contrasting visual themes is very appealing. The visual style serves as a constant reminder that there is something terribly wrong in this beautiful place. The series is filled with plenty of skull-crushing, blood-gushing, highly stylized, violent action. By the way some of the zombies are disposed of,you’d think these high school kids were practicing martial arts together their entire lives. It makes for some very cool fight scenes that would be at home in most John Woo movies.

High School of the Dead is campy, in your face, bloody, sexy, vicious, and inappropriate but that is why it is all incredibly fun. It is the type of anime you can watch casually, yet receive a great amount of enjoyment from.  It’s a series that doesn’t take itself too seriously which makes it easy to sit back and enjoy.  Relax, eat something, smoke something, drink something, and laugh. Oh, and for the refined gentlemen out there, Episode Six is a must see!

Watch Trailer, Teasers and purchase entire episodes of “Highschool Of The Dead” here
And make sure to check out more from Anime Network on Youtube!

All Images, Videos, Characters, Logos and I.P are property of the prospective owners and appear courtesy of the owners and are not owned by us.  Alien Cyborgs does not own any of the rights to any of the properties seen in this post.