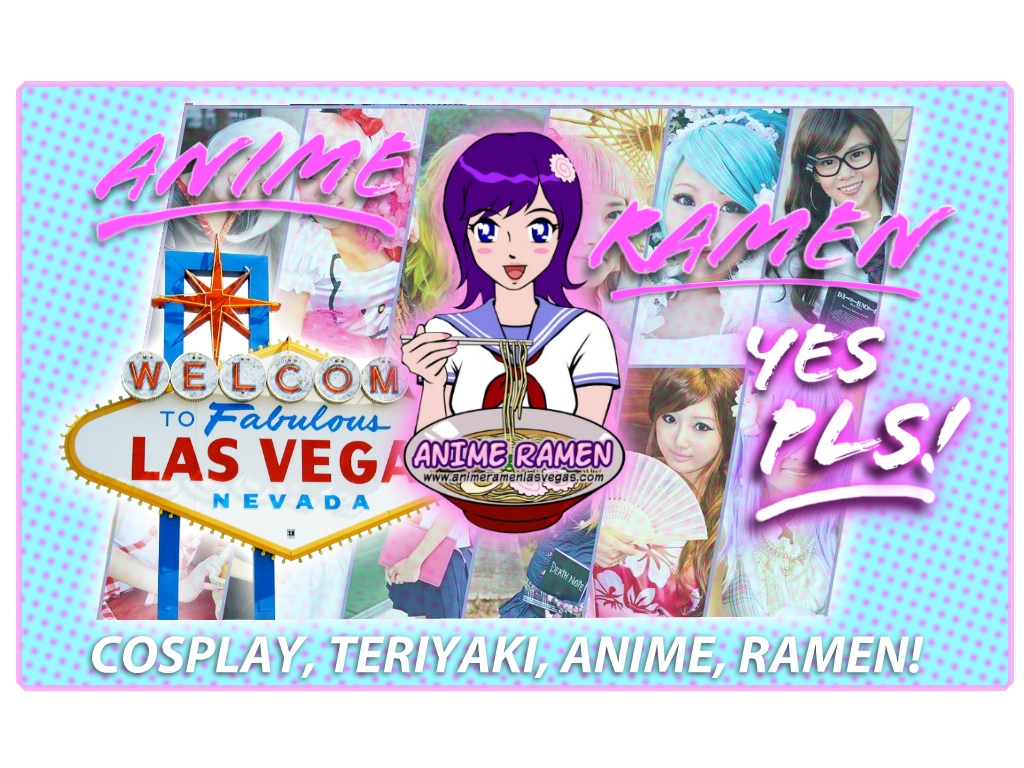 Nestled in an unassuming little strip mall in the Asian sector of town, hides one of Las Vegas’ best kept secrets…a ramen house. But not just any old ramen house, an ANIME RAMEN house!

At first glance the restaurant doesn’t look any different from any other strip mall Ramen House. We we’re even greeted with obligatory Japanese salutation when we first walked in :* “Irasshaimase!”

*Roughly meaning “Come on in!”

That’s right about when you notice the glaring difference between this ramen house and all the other ones you’ve been too. At first, I thought my eyes were playing tricks on me but when my eyes finally focused and I saw the “ear to ear” smile on fellow Alien Cyborg “Mem Z’s” face, I knew what I was seeing was in fact, 100% real.

We were greeted by an adorable Asian girl with long flowing cotton candy pink hair which fell to the small of her back. I later found out that our hostess/servers name was name was Ploy. As if Ploy’s bubble gum hair wasn’t enough to stop you in your tracks her saccharine sweet J-Pop smile would.

While I got you here let me  take a minute to describe the outfit Ploy had on: she was wearing what looked like a “Strawberry Shortcake” baby doll frock, a frilly petty coat with white leggings and shiny black Mary Jane shoes, she looked like a walking birthday cake. Don’t ask me how but it all worked out to be very cute…in an anime sort of way, of course.

We were seated in a spacious booth directly across from a table of 6 teen geeks, deep in conversation about how “…keeping up on the actual manga series and reading the books are soooo much better than watching the watered down animated version!” (+2 bonus points for actually reading!)

To which the girl at the end of the table stopped knitting (yes knitting, the hot new pass time) snapped back, “Well, not all of us can READ JAPANESE!”

After a few minutes of “ear hustling“, I decide to get back to the menu. I notice that was out of place on the menu, oh it was was stocked with all the usual fare: Teriyaki, Ramen, Fried Rice, Yakisoba etc. That wasn’t what struck me as out of place…what DID strike me as being out of place was the prices, there was NOTHING over $10! About a minute later a cute freckle faced asian woman by the name of Julie appeared at our table donning a hip length light pink and white wig and what I can only describe as a “Cute Little Maid Outfit” with thigh high stockings. Again, this all worked in an anime sort of way…of course.

Julie asked us for our drink order and suggested we try a Japanese yogurt drink Calpico, which MemZ gladly ordered, while I opted for an almond milk tea with *easy boba. Who doesn’t love milk tea with boba, it’s the drink you can eat!

(*ed note– I love boba, but sometimes I don’t want too many because the tricky lil’ tapioca orbs shoot up the straw and try to choke me out! Tricky lil’ bastards.)

The Colpico was…interesting to say the least. It wasn’t bad at all, just not what I expected. The Almond Milk Tea on the other hand was bomb! Not too sweet and not too milky, I would have ordered another one I but didn’t want to wreck my appetite.

We went ahead and ordered two appetizers …and why not, it was on Alien Cyborgs’s dime not ours! We got the Gyoza and the Mixed Tempura, both were as just as good as any other Japanese Restaurant that I’ve ever been too. The Gyoza was perfect and the tempura was light, crispy and fresh. After wolfing down our appetizers we waited for your server to take our entree order, at this point I start to look around at the establishment. Let me take a moment out to describe the decor: everything is clean and modern and all the walls are adorned with framed anime art. There are trading cards and calendars of the servers dressed in various forms of anime attire for sale on the back wall. The central focus in the room is a large LED monitor mounted in the center of main wall which was running an anime of what looked like Green tea, Vanilla and Red Bean Mochi Balls happily singing in Japanese. Hmm…very interesting to say the least. Julie comes back to take our food order, I go with the “Ramen Special” which is : Tonkontsu + Shoyu broth mixed with onions, bean sprouts, a hard boiled egg and slices of tender pork!!

The ramen didn’t take long to come and when it did, we were presented with big steaming bowls of yummy noodle goodnes! The bowl was so big I didn’t know if I should just dig in and eat it or climb in and soak for awhile!

I opted to eat since the sight of the noodles made my stomach start to growl in a very feral fashion and boy was I happy I did. The noodles were firm, the veggies fresh, the “special” mix of both Tonkontsu and Shoyu broth was just savory enough and the pork…the pork was perfect. It was tender, and not too fatty. I’m pretty sure that MemZ was pretty happy with his choice because for the duration of the meal he was hunched over with his face in his bowl.

The entree portion of our meal was pretty silent barring the accidental sound of noodle slurping and a few “mm, good’s” thrown in for good measure.

SLURPING! Now, I hear mixed things when it comes to the “Slurp”, I’ve heard that in some establishments in Japan that it is perfectly ok to slurp…it lets the proprietor know that you appreciate the ramen. While in Viet Nam and Korea it is considered rude to slurp. Since I was not in Japan, I decided to let my very western sensibilities take over and I stifled my slurping and kept down to a minimum, only doing so accidentally once or twice. Not to mention the sound is just kinda gross. Although, on second thought I would  at least know that I was surrounded by a room full of people thoroughly enjoyed their ramen as much as I did and at that point I would probably slurp away…”when in Ramen to as the Ramens do.” Or something like that. When we finally pushed the bowls away, all we could do was lean back in the booth and stare at the ceiling due to the over load of noodles…that was until Julie flitted over, smiled and squeeked one magic word: Dessert?!

Normally, I would have graciously declined but since we were doing a review, MemZ and I looked at each other and shrugged. MemZ looked at her very cool like said “What do you recommend?”

We must have looked game because she didn’t even bother to tell us our choices, all she said was “I know just the thing!” then Julie spun on her heel and disappeared with a pop and a twinkle just like in an anime…at least that’s what I think I saw. I was in a food coma so, don’t quote me on that one.

Just as fast as she disappeared she reappeared  with a plate in her hand that she set in between MemZ and I then dropped two spoons, said “Enjoy” and vanished again. <pop>

What was on the plate you ask…well, when I looked down I saw two triangles of french toast with a big scoop of green tea ice cream, drizzled with honey.

Needless to say the sweet hot/cold combo hit the spot and pushed us over the edge…WOW!

I would say that our experience at Anime Ramen was ALMOST perfect. The reason I don’t say that it was perfect is due to the fact that they don’t have a back room with comfy couches to watch anime and pass out on! Other than that, the experience was pretty damn satisfying.

Now if you ask me to be honest and rate the ramen on a 1-5 scale, I would have to say that it is definitely better than some I’ve had but not as good as others. And by others I mean “Chabuya” in W. Los Angeles, “Ramen-Ya” also in W. Los Angeles and of course, Daikokuya in the Little Tokyo district of Downtown L.A.

So having said that, I give it a 3.5 – 4.0 out of 5 (5 being Daikokuya and Chabuya) on the noodles alone…now factor in all the kitschy anime goodness to the equation, the overall experience was a 4/4.5. The only reason why I don’t rate it higher is because we were there on a quiet afternoon, I hear the place is jumping on weekend nights. Hopefully next time we can make it for dinner! Definitely a place to come if you like Ramen and you love Anime!

DON’T FORGET TO PICK UP AN ANIME RAMEN 2012 CALENDAR ON YOUR WAY OUT! PEACE!