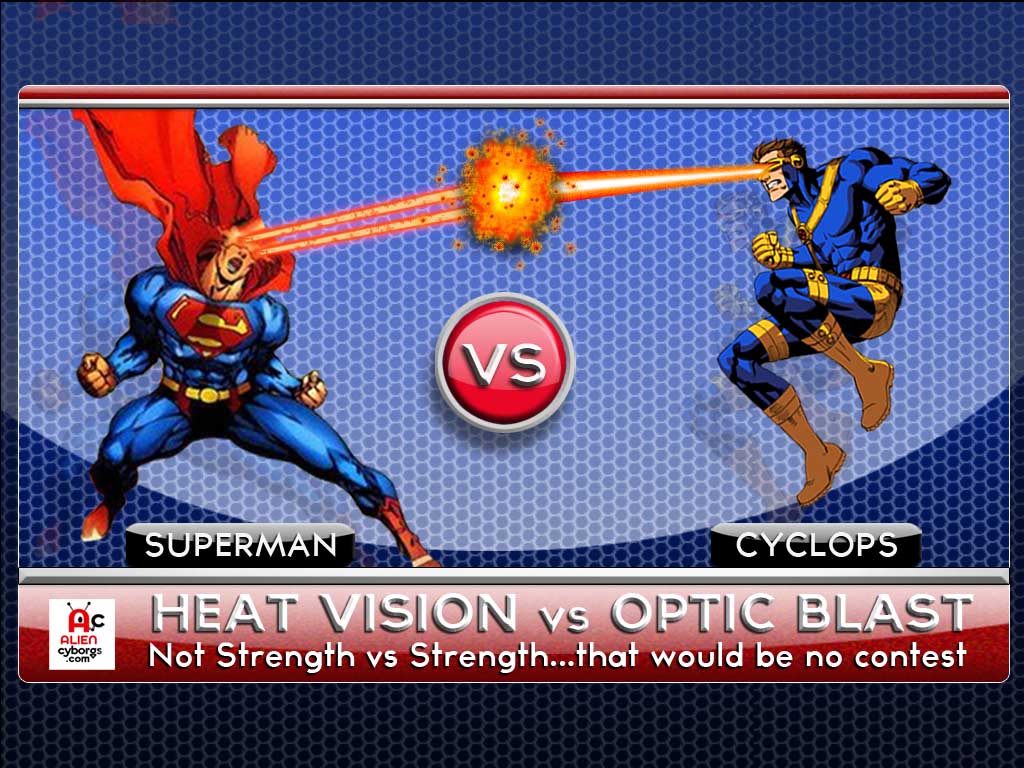 Alien Cyborgs “VERSUS” puts two very similar properties side by side and pits them against each other in a Steel Cage Match to the death! Two warriors go in…only one comes out! You be the judge.

Ok, we all know that if Kal-El and Scott Summers went toe to toe in a battle of fists…it would be NO CONTEST! Having said that, what we decided to do was pit Superman’s Heat Vision up against Cyclops’s Optic Blast! All things being equal if Supes and Cyke had a staring contest, who would win?

One would automatically vote for the Kryptonian because…well, because he is SUPERMAN! But take away the super breath, X-ray vision, the power of flight, super strength and being impervious to almost all manner of harm and what do you have left? HEAT VISION!

Scott Summers aka Cyclops leader of the X-men is a mutant with the physical attributes equal to those of an Olympic Level athlete not very impressive when stacked against Superman’s physical attributes…but lets not forget what makes Scott special: his mutant ability to shoot concussive force beams from his eyes called Optic Blasts!

Both heros have some pretty spectacular ocular talents but who’s do you think has the “looks that kill?” Who’s peepers do you think packs more pep and would win in a fight if the physical playing field was leveled? Both are said to derive their powers from the sun and both demonstrate pinpoint accuracy with their respective abilities.

I think the argument here is what do you think would do more damage, Force or Fire? It is a tough one to ponder so we’ve added links to the wiki of each of their sets of powers. You read each for yourself and you tell us what you think and who would win by leaving a comment below. We are interested in what you have to say and we might just read your comments on an up and coming edition of the Geek Speak Geek Podcast!

Thanks for the comments!

“Speak Out with your Geek Out!”

2 thoughts on “Alien Cyborgs VERSUS : Heat Vision vs Optic Blast”