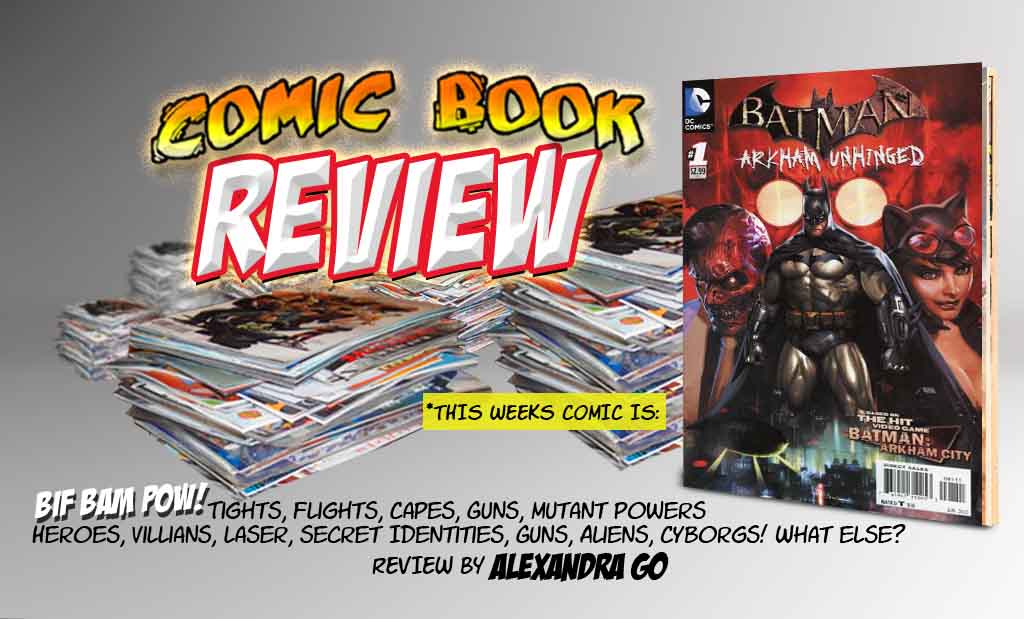 I hate to admit it, but it’s been a really long time since I picked up a batman comic. I loved them as a kid but as I got older, we drifted apart. Kind of like my best friend from middle school. I moved away and we basically never spoke again.

Unlike my middle school bestie, every once in a while I find myself missing the special friendship we use to share. Unlike my estranged gal pal, It’s much easier for me to jump back in to this relationship.

I am a huge fan of the Batman Arkham Asylum and Arkham City video games, so when a friend suggested I take a look at the Arkham Unhinged series I was in.

Originally a web based series; Arkham Unhinged is a continuation of the Arkham City story arch. Consisting of 58 installments, at first it seemed like an intimidating series to just jump into. Do I want to commit to that many issues? So after some carefully planned and executed researched (google), I found that this series is broken up into several different story lines. Issues 1-6 encompass the first of these story arches. I can commit to 6 issues. I opted to buy 4 issues in print and 2 in digital download form.

The download option is definitely a huge plus for me. At 99 cents each, this is an excellent option for a fan on a budget. I’ve always felt that there was something special about holding a comic in my hands but I have to admit, I loved how inexpensive and easy to get these downloads were.

I expected to fall in love with this series, and in its defense, there were many things I did like about it. I’ve always held a special love and fascination with villains. I loved Arkham city because it wasn’t good guy against bad guy. It was good guy against ALL the bad guys. Many of the characters that we all know in passing get there 15 minutes of fame in this series. I have to say though, for me, the biggest draw to this series was the cover art. The covers really are hauntingly beautiful. Even if you never pick up an issue, take a second to check out the covers of issues 1 and 3. The covers alone made me want to own these comics. The internal artwork is also mighty impressive, but it almost seemed a little lack luster compared the EPIC cover art.

I think because I found the comics so beautiful and I already played and loved the game, I might have had an unrealistic expectation for this series. To me, the story line seemed to follow “Arkham City” too closely. I felt too much of a sense of déjà vu. I’ve been here before. I played this, I watched this and now I’m reading it. Maybe that’s just what happens when you turn a comic into a videogame and then back into a comic.

I know, I know. It sounds a lot like I’m really hating on “Arkham Unhinged”. I wanted to love it. I tried to love it. I even read them all a second time, you know, just to make sure I wasn’t missing something. Unfortunately, I found I hadn’t missed anything.

I will however say, purely from an artistic standpoint, these comics can be considered collectable. The artwork is beautiful, detailed and engaging. Each issue is exceptional and unique.  I have friends that collect certain series, specifically for those reasons. I’m a story collector, so this might not be one that I continue to buy but this is definitely one I that I’ll keep in the archives for my artsy fartsy  friends!

To recap, If you’ve never played the video game, you’ll love “Arkham Unhinged”. The story is still awesome, especially if this is your first introduction to it. If you’re like me and you’ve already played the game, you may find the storyline a little bit too familiar. In my opinion, anyone and everyone can appreciate the artwork. These comics are most definitely fascinating to look at. A huge positive I found with this series was the affordability of the digital copies. Even the print copies aren’t insanely priced (Issue 1 was the most expensive at $6.00).

So the Batman and I have been reunited. I didn’t see fireworks, like I was hoping but that doesn’t mean I’m abandoning my boy in black. Like I always say, there are plenty of fish in the sea, or in this case, plenty of bats in the sky. I’ll be back DC universe!! Get ready to impress me! ~ Alex Go.

“SPEAK OUT WITH YOUR GEEK OUT”